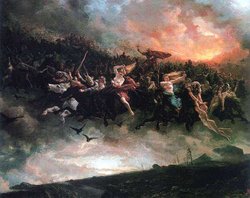 The Norse Wild Hunt was led by Odin and as for the general concept of Wild Hunt it was meant as a raid to catch souls by riding the night on air.

Apart from thus showing why the Hunt is Wild, and supporting ideas of ecstatic trance and spirit flight, this clue may lead us to a possible origin of theWild Hunt.

By donning animal skins or believing themselves transformed into animals by their rage of shapeshifting Berserkers can easily be seen as the hounds of Odin’s Wild Hunt.

As Kris Kershaw has documented in 2001, the ritual re-enactment of the Wild Hunt was a cultural phenomenon documented among many Gaulish and Germanic people.

The comparison of Berzerkers' with wolves (they are referred to as wolf-coats in Hrafnsmal) makes them symbolically dead - wolves are synonymous in Old English with outlaws and criminals, considered socially dead so the Wild Hunt of the dead might have originated from their exploits.

The death-dealing chaos of the Berzerks in action relates to the dark, wild side of nature, and particularly the privations of winter.

Thus the myth of the Wild Hunt seems to be a part of the drama of the turning year, re-enacted by the Berzerks as part of an Odinic cult.

Legends of the Norse Wild Hunt or Furious Host have maintained a remarkable degree of consistency through their wide range of time and space a consistency which can, perhaps, be best explained by the essential reality of the underlying belief to those who held it, from the heathen period through the time of our own grandparents

Attempts have also been made to interpret the legends as based on natural phenomena. In the late 19th and early 20th century, the Wild Hunt was often compared to the storm winds of winter.

Another belief is that Odin’s hounds passage is mistaken for the passing of wild geese, and in Eastern Hinterpommern, the Wild Hunt comes in spring and fall, when the migratory birds come and go. It cannot be denied that the eerie barking voices and rustling of a flock of geese passing overhead is very likely to have contributed to the longevity of the belief in the hunt. However it doesn’t explain the legend; after all those birds do not visit the Northern Countries at Yuletime, when the Wild Hunt most often rides.