Anonymous
×
Revision as of 23:19, 28 February 2022 by Admin (talk | contribs) (Created page with "'''Desmodus draculae''' is an extinct species of vampire bat that inhabited Central and South America during the Pleistocene, and possibly the early Holocene. It was 30% large...")
(diff) ← Older revision | Latest revision (diff) | Newer revision → (diff)

Desmodus draculae is an extinct species of vampire bat that inhabited Central and South America during the Pleistocene, and possibly the early Holocene. It was 30% larger than its living relative the common vampire bat (Desmodus rotundus). Fossils and unmineralized subfossils have been found in Argentina, Mexico, Ecuador, Brazil, Venezuela, Belize, and Bolivia. 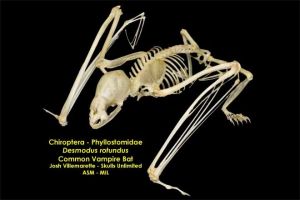 The first Desmodus draculae fossil was located in Cueva del Guácharo in Venezuela in 1965 by Omar J. Linares, which he noted in 1968 as a possible Pleistocene species of Desmodus. A formal and accepted description of the species was published in 1988, designating the collection by Linares, a skull and post-cranial material, as the type specimen. Most records of D. draculae are from the late Pleistocene, but some are from the Holocene. Fossils of D. draculae have been found in Mexico, Belize, Venezuela, Brazil, and Argentina, in six caves total. The species was likely widely distributed throughout South America.

The authors assigned the specific epithet draculae, noting "the largest known chiropteran vampire commemorates Count Dracula, the greatest human vampire of folklore", and placed the novel species with the genus Desmodus. Desmodus draculae has been occasionally called the giant vampire bat in reference to its greater relative size.

Based on its skull dimensions, it may have had a wingspan of approximately 50 cm (20 in) and a body mass of 60 g (2.1 oz). The proportions are equivalent to a smaller megabat or larger microbat of modern chiropteran fauna.

The species is regarded as geologically extinct, as only bones of it have been documented and it has not been reported in surveys. However, its extinction is assumed to be geologically recent, as some of its remains discovered were not yet fossilized. The date and reason for its extinction are currently unknown. One hypothesis for its extinction states that it was highly specialized on megafaunal mammals as prey, which became extinct in the Quaternary extinction event, and D. draculae was unable to switch to smaller prey.

There have been mysterious sightings of giant bats or bat-like creatures. One of the earliest sightings dates to 1947 when J. Harrison claimed to have seen several large flying creatures which were described as giant bats (though some people also claimed that they were living pterosaurs).

In the early 1950s, a Brazilian couple claimed that they encountered a bat-like creature in the same valley that fossils of D. Draculae were discovered in Brazil. Another incident occurred in 1975 when an outbreak of animal mutilations hit Puerto Rico. A farmer said that he was repeatedly attack by two grey bird-like creatures. These creatures were also seen by others throughout the mutilation outbreak. Another sighting occurred in the mid-1970s in Texas, when a farmer asserted that he had encountered bald bat or pterosaur-like creatures with short beaks and gorilla-like faces. Three toed prints of this creature were also said to have been found.

It has been speculated that D. draculae was part of the inspiration for the Mayan bat-god Camazotz. D. draculae could have also inspired legends of the Mura people, an indigenous people in Brazil, about the Caoera, a blood-eating bat the size of a vulture.