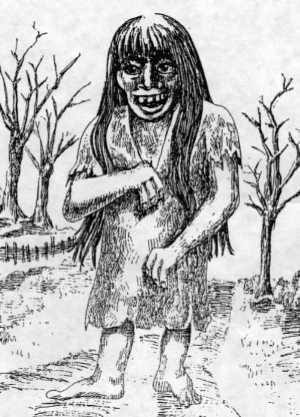 In Chile mythology, Fiura is a female goblin, the only daughter of the Condená and the woman of the virile Trauco.

The Fiura has the aspect of a small woman of horrible face, long hair, generous chests and foul breath.

She is coquettish and likes to bathe in cascades, grooming her thick long hair with a comb of crystal. After bathing she sits naked for hours on a bed of moss. 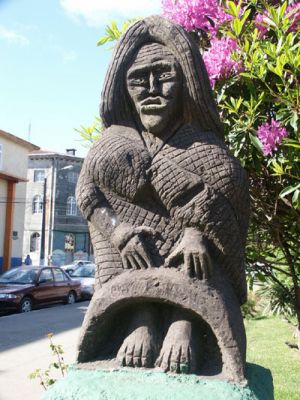 Statue of Fiura on Chiloé

Fiura is an irresistible seductress and having satisfied her sexual appetite drives her victims insane. She casts a spell of sickness upon those that rebuff her, be they animals or men. The deformations caused by the Fiura are practically incurable except for fortunate cases, in which by means of the following treatment relief could be gotten:

to the dawn short a branch of the climbing called Pahueldún. Once transported next to the sick person, she whip you it, she you until sprout the sap, which should drink the sick person. Immediately the whipped branch dragging you it until the beach, in order to throw it to the sea.

It is also said that one could take scrapes of "Stone of Altar" in order to counteract the provoked wrongs for the Fiura. The power of her breath can scar or turn animals lame. A person may be mocked by calling "donde va ese "Fiura", as if to say: "what's up with that scarecrow?"