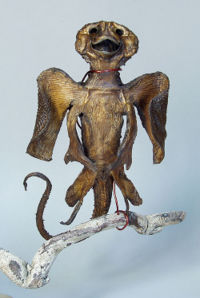 A Jenny Haniver is a ray or a skate which has been modified and subsequently dried, resulting in a grotesque preserved specimen. Jenny Hanivers were created to look like devils, angels and dragons and became popular during the sixteenth and seventeenth centuries. Some writers have suggested the sea monk may have been a Jenny Haniver.

One suggestion for the term was "jeune de Antwerp" (the French call Antwerp, Anvers), that is "young girl of Antwerp." British sailors "cockneyed" this description into the personal name "Jenny Hanvers."

For centuries, sailors sat on the Antwerp docks and carved these "mermaids" out of dried cuttlefish. They then preserved them further with a coat of varnish. They supported themselves by selling their artistic creations to working sailors as well as to tourists visiting the docks.

It is not difficult to imagine how these fakes originated, since the underside of the head of a skate, ray, and chimaera crudely resembles a human face. With a little embellishment, these fishes can be transformed into a monster. First, the mouth and the tissue on the sides of the mouth are manipulated to give it a more human appearance, and artificial eyes are inserted into the nostrils. The pectoral fins are clipped and pulled to the side to give the impression of two arms and a devil's cape. For skates and rays, the legs are fashioned from the appendages on the pelvic fins of male fishes, whereas in chimaeras, they may be produced by splitting the tail into two "legs" and a spiked tail. Finally, after careful drying, a Jenny Haniver results.

Natural histories of the 16th Century broke into a rash of stories about marvelous fish shaped like men. 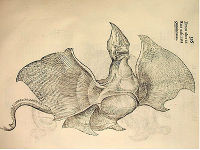 Drawing of the creature

"two-footed creatures with very small wings, which one could scarcely deem capable of flight, with a small head . . . like a serpent, of a bright colour, and without any feather or hair."