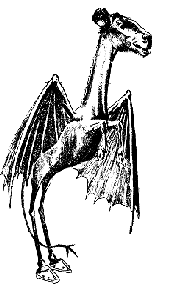 Illustration of the Jersey Devil, drawn from a description by Nelson Evans in the Philadelphia Evening Bulletin, 1909

The Jersey Devil is a legendary creature said to inhabit the Pine Barrens in southern New Jersey. The Devil is often described as a bipedal flying creature with hooves, but there are many variations. The legend inspired the name of New Jersey's NHL ice hockey team, the New Jersey Devil], and many other pop culture tributes.

According to one version of the tale, the Jersey Devil was the thirteenth child born to a Mrs. Leeds, a resident of the Pine Barrens during the mid-17th century. Mrs. Leeds was so upset at yet another pregnancy that after giving birth she exclaimed, "I am tired of children! Let the devil take this one!" What was once a human child immediately transformed into a winged monstrosity; he ate all the other children and flew out through the chimney. There are many versions of this legend, differing in date of the birth and the degree of the Devil's disfigurement. In some stories, the Devil is merely a human child which Mrs. Leeds confined to her cellar or attic, only to have it escape into the woods (see feral children for more on similar legends and real life examples). Another legend attributes the Devil's birth to a Gypsy curse placed upon a selfish young woman who refused to give the Gypsy food and shelter. There are other tales that suggest Leeds herself was a witch or that she was cursed by locals for having an affair with a British soldier. The Shourds House, a log cabin within the Pine Barrens, was reputed to be the birthplace of the Devil. Only ruins of the foundation of the house and a few other parts still exist today.

The Jersey Devil has been said to be companion to a headless pirate, a ghostly woman, and a mermaid. In certain parts of South Jersey, the Devil is rumored to live in an apocryphal Agent Orange plant near Chatsworth, a very small town surrounded by forest and sand.

There is another description on the New Jersey devil that is well-known by local people in South Jersey. A woman in South Jersey was having her first baby and she wanted him to be perfect. When the baby was born, it was the most ugly looking baby that anyone had ever seen at that time. The mother was so upset that she said "This isn't my son. This is the devil's son. May God give the thing back to him!" After saying this, she threw her son into the river. The son died. Now that river is said to be haunted by the devil. Many people have died there. It is said that there is an unknown source which sucks air to it from under a rock. When people swim near there, they are sucked under the rock; they are then held there until they die. Once they are dead, the body is let go so that it floats to the top for everyone to see.

In 1840, the Devil was blamed for livestock killings. 1841 saw a similar attack, accompanied by strange tracks and screams. The Devil made an 1859 appearance in Haddonfield. Bridgeton witnessed a flurry of sightings during the winter of 1873.

Joseph Bonaparte (eldest brother of Emperor Napoleon) is said to have seen the Devil while hunting on his Bordentown, New Jersey, estate. Commodore Stephen Decatur is claimed to have fired upon the Devil while testing ammunition on a New Jersey firing range. He and his audience were dumbfounded to watch the Devil continue its flight apparently untouched.

January 1909, however, saw the most widespread period of sightings ever recorded. Thousands of people claimed to have seen the Devil during the week of January 16 – 23. Newspapers nationwide followed the story and published eyewitness reports. Hysteria gripped the entire state during this terrible week.

In addition to the number of major attacks and sightings, the Devil was sighted flying over many other towns. Since the week of terror in 1909, sightings have slowed considerably, but by no means did they end. In 1951 there was another panic in Gibbstown, New Jersey, after local boys claimed to have seen a humanoid monster and heard screams. As recently as 1991, a pizza delivery driver in Edison, New Jersey, described a night encounter with a white, horse-like creature. There today exist many websites and magazines (such as Weird NJ) which catalog sightings of the Devil.

Many different descriptions have been by those who have seen the creature. Several eyewitness accounts follow.

While the descriptions vary, several factors remain fairly constant. It is commonly described as having a long neck, with wings and hooves. It is often said to have a horse-like head and a tail. The height of the creature varies among sightings from about three feet to more than seven feet. Most sightings also report that the creature has glowing bright red eyes and emits a high, human-like scream.

There are many possible roots of the Jersey Devil legends. The Pine Barrens, as their name suggests, were avoided by early settlers as a desolate, threatening area. The barrens provided a natural refuge for those who wished to remain hidden, starting with religious dissenters, loyalists, fugitives and deserting soldiers in colonial times. These people, cut off from much of the outside world, formed their own solitary groups and were pejoratively referred to as "pineys". Some of the pineys included notorious bandits known as Pine Robbers. Pineys were further demonized after two eugenics studies at the turn of the century depicted them as congenital idiots and criminals. It is easy to imagine early tales of terrible monsters arising from a combination of sightings of genuine animals such as bears, the activities of pineys, and fear of the imposing barrens themselves.

Outdoorsman and author Tom Brown, Jr. spent several seasons living entirely within the wilderness of the New Jersey Pine Barrens. He recounts several occasions when terrified hikers mistook him for the Jersey Devil, particularly after he covered his whole body in mud to repel mosquitoes.

Of course, the most influential, and probably most important, roots of the tales of the Jersey Devil are the testimonials of people who have come into contact with the creature, from before the European settlers arrived to the present day.

The Jersey Devil in popular culture

In the Extreme Ghostbusters episode "The Jersey Devil" the Ghostbusters run into the Jersey Devil while driving through New Jersey. The Devil is described as a "Class 3 Biopheric Spectre, a demonic lifeforce inhabiting iron ore and other minerals." The Devil was supposedly created when a demon possesed ore being smelted in a forge in Hanover, New Jersey. The Ghostbusters destroy the Devil when they use an old cannon to blast it back into the forge and smelt it back down to it's base materials.

In the American Dragon: Jake Long episode "Long Weekend", Jake is called upon to defend a community of sprites from the Jersey Devil.

The fifth episode of The X-Files centers on murders committed by the "Jersey Devil," later revealed to be feral (yet relatively harmless) human beings.

The 1998 movie The Last Broadcast centers on the brutal and mysterious murders of a public access crew that traveled into the Pine Barrens of New Jersey in search of The Jersey Devil.

There was also a small B-grade horror film, 13th Child: Legend of the Jersey Devil, filmed on location in the Pine Barrens.

There is a professional wrestler in New Hampshire-based WAW called "The Jersey Devil". He is tall and scrawny with a painted face resembling a smile and horns and wears tattered and torn clothing.