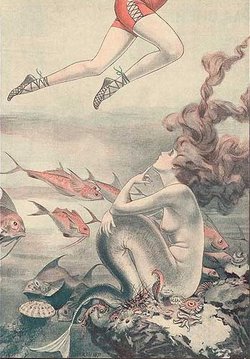 A mermaid looks up at the legs of a swimmer; 1921 cartoon

A mermaid is a legendary aquatic creature with the head and torso of human female and the tail of a fish. The male version of a mermaid is called a merman; the gender-neutral collective noun is merfolk.

Various cultures throughout the world have similar figures. They were known to sing sailors to their deaths, like the Siren, or squeeze the life out of drowning men, while trying to rescue them.

The word mermaid is from the Middle English mere, in the obsolete sense 'sea' + maid(en). The Sirens of Greek mythology are sometimes portrayed in later folklore; in fact in some languages the name sirena is used interchangeably for both creatures.

Mermaids and their kin 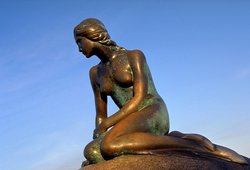 The statue of The Little Mermaid, a monument to Hans Christian Andersen, in Copenhagen harbour.

Tales of mermaids are nearly universal. The first known mermaid stories appeared in Assyria, ca. 1000 BCE. Atargatis, mother of Assyrian queen Semiramis, was a goddess who loved a mortal shepherd and in the process killed him. Ashamed, she jumped into a lake to take the form of a fish, but the waters would not conceal her divine nature. Thereafter, she took the form of a mermaid — human above the waist, fish below — though the earliest representations of Atargatis showed her as being a fish with a human head and legs, similar to the Babylonian Ea. The Greeks recognized Atargatis under the name Derketo, where she was often conflated with Aphrodite.

Lucian of Samosata in Syria (2nd century CE) in De Dea Syria ("Concerning the Syrian Goddess") wrote of the Syrian temples he had visited:

"Among them - Now that is the traditional story among them concerning the temple. But other men swear that Semiramis of Babylonia, whose deeds are many in Asia, also founded this site, and not for Hera Atargatis but for her own Mother, whose name was Derketo"
"I saw the likeness of Derketo in Phoenicia, a strange marvel. It is woman for half its length, but the other half, from thighs to feet, stretched out in a fish's tail. But the image in the Holy City is entirely a woman, and the grounds for their account are not very clear. They consider fishes to be sacred, and they never eat them; and though they eat all other fowls, they do not eat the dove, for she is holy so they believe. And these things are done, they believe, because of Derketo and Semiramis, the first because Derketo has the shape of a fish, and the other because ultimately Semiramis turned into a dove. Well, I may grant that the temple was a work of Semiramis perhaps; but that it belongs to Derketo I do not believe in any way. For among the Egyptians, some people do not eat fish, and that is not done to honor Derketo." <ref>Lucian of Samosata, De Dea Syria Part 2, Chapter 14</ref>

A popular Greek legend has Alexander the Great's sister, Thessalonike, turn into a mermaid after her death Teacher's Guide. She lived, it was said, in the Aegean and when sailors would encountered her, she would ask them only one question: "Is Alexander the king alive?" to which the correct answer would be "He lives and still rules" Any other answer would spur her into a rage, where she transformed into a Gorgon and meant doom for the ship and every sailor onboard.

Among the Neo-Taíno nations of the Caribbean the mermaid is called Aycayía [1] she of the beautiful voice. [2]. Her attributes relate to the goddess Jagua, and the hibiscus flower of the majagua tree Hibiscus tiliaceous [3]. Examples from other cultures are the Mami Wata of West Africa, the Jengu of Cameroon, the Merrow of Ireland and Scotland, the Rusulki of Russia, and the Greek Oceanids, Nereids, and Naiads. One freshwater mermaid-like creature from European folklore is Melusine, who is sometimes depicted with two fish tails, and other times with the lower body of a serpent. It is said in Japan that eating the flesh of a mermaid can grant unaging immortality. In some European legends mermaids are said to grant wishes.

It has been widely suggested that manatees or dugongs could be behind the myth of the mermaid. These large aquatic mammals are notable for the way in which they carry their young, cradled in their arms much as a human would carry a baby. It is possible that sailors seeing these unfamiliar beasts for the first time, would assume that they had in fact stumbled across some sort of humanoid species, and consequently spread their accounts of the sightings through their homelands on their return from voyages. It has even been posited that the traditional image of a mermaid with long flowing hair could be attributed to manatees breaking the ocean surface underneath patches of seaweed, and giving the unfamiliar observer the impression of having long hair. Prior to 546 B.C., the Milesian philosopher Anaximander proposed that mankind had sprung from an aquatic species of animal. For, he thought, man with his extended infancy could not have survived, originally, in the manner he does presently. This idea, based on elemental forces of mutation as opposed to evolution, does not appear to have survived Anaximander's death.

A Book of Mermaids, by Ruth Manning-Sanders, is a representative book of 16 fairy tales from around the world.

[4] followed in 1988. It starred Amy Yasbeck and Todd Waring, and was later made in to a short lived television series. ustralian television series, H2O: Just Add Water (2006), involves 3 teenage girls who, after encountering a mysterious island grotto, transform into mermaids whenever water touches any part of their bodies in a similar way.

Sirenomelia, also called "mermaid syndrome", is a rare congenital disorder in which a child is born with his or her legs fused together and the genitaliareduced. This condition is about as rare as conjoined twins and is usually fatal within a day or two of birth because of kidney and bladdercomplications, though there are three known survivors of this disorder alive today.

In the 19th century, P. T. Barnum displayed in his museum a taxidermal hoax called the Feejee (sic) Mermaid. Others have perpetrated similar hoaxes, which are usually papier-mâché fabrications or parts of deceased creatures, usually monkeys and fish, stitched together for the appearance of a grotesque mermaid. In the wake of the 2004 tsunami, pictures of Fiji mermaids were passed around on the internet as something that had washed up amid the devastation, though they were no more real than Barnum's exhibit [7]

Part of this article consists of modified text from Wikipedia, and the article is therefore licensed under GFDL.
Retrieved from "https://www.monstropedia.org/index.php?title=Mermaid&oldid=8938"
Categories: