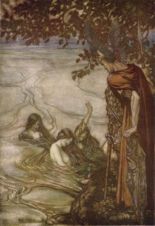 THE Nixes, or Water-people, inhabit lakes and rivers. The man is like any other man, only he has green teeth. He also wears a green hat. The female Nixes appear like beautiful maidens. On fine sunny days they may be seen sitting on the banks, or on the branches of the trees, combing their long golden locks. When any person is shortly to be drowned, the Nixes may be previously seen dancing on the surface of the water. They inhabit a magnificent region below the water, whither they sometimes convey mortals.

A girl from a village near Leipzig was one time at service in the house of a Nix. She said that everything there was very good; all she had to complain of was that she was obliged to eat her food without salt. The female Nixes frequently go to the market to buy meat: they are always dressed with extreme neatness, only a corner of their apron or some other part of their clothes is wet. The man has also occasionally gone to market. They are fond of carrying off women whom they make wives of, and often fetch an earthly midwife to assist at their labour.