A Merrow or Murrough (Galloway) is the Scottish and Irish Gaelic equivalent of the mermaid and mermen of other cultures. 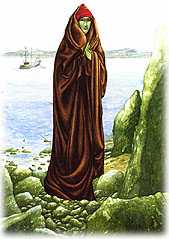 The word merrow or moruadh comes from the Irish muir (meaning sea) and oigh (meaning maid) and refers specifically to the female of the species. There are other names pertaining to them in Gaelic: Muir-gheilt, Samhghubha, Muidhuachán, and Suire.

These beings are said to appear as human from the waist up but have the body of a fish from the waist down. Female Merrows were considered very beautiful, but the mermen were basically ugly, with pig-like features and long, pointed teeth. The merrow has soft white webs between her fingers, and the female is often seen with a comb parting her long green hair on either side.

Merrows have special cap or cape, called a cohuleen druith to enable them to travel through ocean currents. In Kerry, Cork and Wexford, they wear a small red cap made from feathers, called a cohullen druith. However, in more northerly waters they travel through the sea wrapped in sealskin cloaks, taking on the appearance and attributes of seals. Sometimes they are said to leave their outer skins behind, to assume others more magical and beautiful.

It should not be assumed that merrows are kindly and well-disposed towards mortals. As members of the sidhe, or Irish fairy world, the inhabitants of Tir fo Thoinn (the Land beneath the Waves) have a natural antipathy towards humans.

They enjoy playing music which is often heard coming from beneath the waves. The merrow were capable of attachment to human beings and there are reports of them inter-marrying and living among humans for many years. Many coastal dwellers have taken merrows as lovers and a number of famous Irish families claim their descent from such unions, notably the O'Flaherty and O'Sullivan families of Kerry and the MacNamaras of Clare.

Merrow-maidens are also reputed to lure young men to follow them beneath the waves where afterwards they live in an enchanted state. Other stories tell of mer-men who capture the souls of drowned sailors and keep them in soul cages under the sea.

In order to come ashore, the merrow abandons her cap or cloak, so any mortal who finds these has power over her, as she cannot return to the sea until they are retrieved. Hiding the cloak in the thatches of his house, a fisherman may persuade the merrow to marry them.

Such brides are often extremely wealthy, with fortunes of gold plundered from shipwrecks. Eventually the merrow will recover the cloak, and find her urge to return to the sea so strong that she leaves her human husband and children behind.