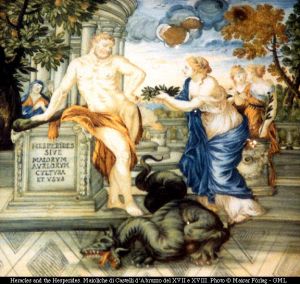 Ladon was the dragon that guarded the Garden of the Hesperides and the golden apples before Heracles slain him as part of his Eleventh Labour.

Ladon was given several parentages, each of which placed him at an archaic level in Greek myth: the offspring of Phorcys and Ceto[2] or of Typhon and Echidna or of Gaia herself, or in her Olympian manifestation, Hera: "The Dragon which guarded the golden apples was the brother of the Nemean lion" asserted Ptolemy Hephaestion.[4] In one version, Heracles did not kill Ladon. Ladon is the Greek version of the West Semitic serpent Lotan, or the Hurrian serpent Illuyanka.He is variously described as the offspring of or of .

The image of the snake-dragon coiled round the tree, originally adopted by the Hellenes from Near Eastern and Minoan sources, is familiar from surviving Greek vase-painting. In the second century CE, Pausanias saw among the treasuries at Olympia an archaic cult image in cedar-wood of Heracles and the apple-tree of the Hesperides with the dragon coiled around it.[5]

Ladon might be given multiple heads, a hundred in Aristophanes' The Frogs (a passing remark in line 475), which might speak with different voices.

Hera had chosen Ladon, a monstrous dragon with a hundred heads, to guard the precious tree which Gaia (Mother Earth) had given to her, Queen of the Heavens, at her wedding to Zeus. So Ladon would lay in the garden, coiling himself around the tree, and Hera feared no one would steal her apples.

When Heracles as one of his Labors sought the golden apples, he had to enlist the aid of the Titan Atlas to overcome the mighty Ladon. Atlas was willing to steal the apples if Heracles relieved him of his burden of holding up the heavens, but only if the hero first did something about Ladon. Heracles killed the dragon with an arrow over the garden wall and took the burden over his shoulders.

While Heracles hoisted up the globe, Atlas trotted off to retrieve the three golden apples. At his return Atlas found he could go on living quite happily without the weight of the world on his shoulders, so he asked Heracles,if he could carry the worldly globe another few months. Heracles agreed but asked Atlas if he could get more comfortable. He begged Atlas to take the globe for a moment while he put some padding on his head. Atlas placed the apples on the ground and picked up the globe. Heracles thanked him very much and walked away with the three apples.

The following day, the Argonauts passed by, on their chthonic return journey from Colchis at the opposite end of the world, and heard the lament of "shining" Aigle, one of the Hesperides, and viewed the still-twitching Ladon.[1]

Ladon is the constellation Draco, according to Hyginus' Astronomy. Hercules is just to the east of Draco. In fact, some cartographers draw the figure of Hercules with one foot resting on the head of Draco.