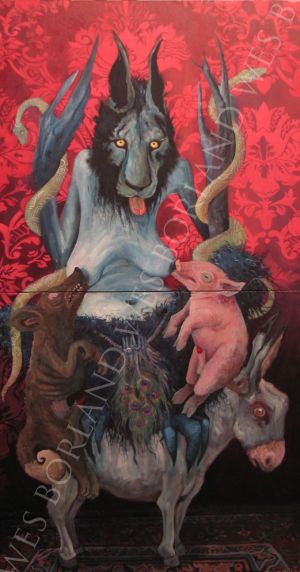 Lamashtu (also known as Lamashtu or Dimme) was a demon goddess in Sumerian and Akkadian mythology.

In Mesopotamian mythology Lamashtu was a female demon that menaced women during childbirth an kidnapped children while they were breastfeeding.

The demoness's name, Lamashtu, is Akkadian for "she who erases." Incidentally, she was said to have seven names and incantations frequently referred to her as "the seven witches."

Lamashtu had a hairy body, the head of a lioness with donkey's teeth and ears, long fingers and fingernails and the feet of a bird with sharp talons. She is often shown standing or kneeling on a donkey, nursing a pig and a dog, and holding snakes.

Lion-headed Lamashtu, holding snakes and with pig and dog at her breasts. On one side there is a lamp, on the other a human head. On the back is a magical incantation. Yellow alabaster. Dating from around 605-562 B.C.E. Drawing © S. Beaulieu, after Pritchard 1969: 215, Plate 657.

Assyrian legend says she is the daughter of the sky god, Anu.

Lamashtu was the enemy of the demon Pazuzu, king of the wind demons, who once defeated her in battle. Although Pazuzu was evil, expectant mothers often wore amulets bearing his image to protect themselves against Lamashtu.

She was also traditionally bribed away with combs and fibulae (safety pins) which mothers set adrift in model boats along with a small clay statue of Lamashtu, in hopes the boat would carry the demoness back to her world.

Amulet from Mesopotamia. The back of the object shows the body of the male demon Pazuzu, his head peering over the top at the front. At the bottom left, Pazuzu drives Lamashtu back to the Underworld, to which she is lured by offerings. She is standing on her donkey, and both are in her boat on the river to the Underworld. She holds snakes and suckles the usual animals. The registers above show a sick person being attended by healers and protective beings, just above a row of protective spirits, and at the top the symbols of the main Babylonian deities. Bronze. 13.3 cms high. Dating to around 625-539 B.C.E.). Drawing © S. Beaulieu, after Black and Green 2003: 181.

She crept into houses at night to kill babies, in their cribs or in the womb. Thus she was responsible for sudden infant death syndrome and miscarriage. She preyed on adults, too, bringing disease, sterility, nightmare, not to mention sucking blood from young men.

She used to sneak into the house of an unlucky pregnant woman and touch the victim's stomach seven times to kill the unborn child. Lamashtu would also steal newborns from their wet nurses and allow them to suckle the toxic milk from her own breasts, which would cause the infant to die. She slaughtered mothers as well, and sometimes dined on the flesh and blood of adult males, although it is unknown whether these men were fathers or just arbitrarily picked. Lamashtu's less lurid exploits include poisoning water with disease, spreading nightmares, killing plants, and causing tetanus and fever.

Lilitu, closely related to Lamastu, was of Babylonian origin. In ancient Hebrew culture this female demon was called Lilith. Talmudic legend places her as the first wife of Adam, banished from Eden for being the earliest feminist on record by refusing to obey her husband. She was, after all, the original woman (by some accounts), having been created from the earth alongside of Adam. Legend and superstition evolved Lilith into a night demon. She flew out of the dark to suck the blood of infants and children. She was blamed for causing men to have erotic dreams in a time when the loss of semen was considered horrific. When Christianity ascended one of the many thrones of human belief, early church fathers assigned the Queen of Night her own Army of Hell which waged fierce war on the good. Incubi (male) and succubi (female) were spirits or demons assuming human form to seduce unwilling victims. Interestingly, many a nun or woman of virtue became pregnant this way.

Many scholars believe that some aspects of the the demoness Lilith (such as her penchant for infanticide) were borrowed from Lamashtu.

One of the primary purposes of Ancient mythology was to explain mysterious natural phenomena, and Lamashtu's place in Sumerian mythos is fundamentally to account for miscarriage, infant death and maternal mortality.

Part of this article consists of modified text from Wikipedia, and the article is therefore licensed under GFDL.
Retrieved from "https://www.monstropedia.org/index.php?title=Lamashtu&oldid=10797"
Categories: