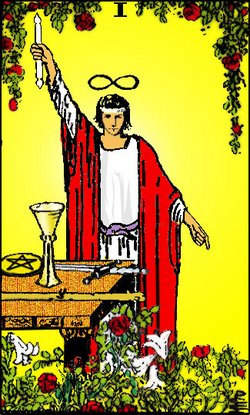 The magician depicted on the Rider-Waite tarot card

A magician is a person skilled in the mysterious and hidden art of magic, which can be described as either the act of entertaining with tricks that are in apparent violation of natural law, such as those performed by stage magicians or illusionists, or the ability of those who claim to attain objectives, acquire knowledge, or perform works of wonder through the use of sorcery and supernatural or nonrational means.

The latter kind of magician can also be referred to as a enchanter, sorcerer, wizard, mage, magus, necromancer, or thaumaturgist. These overlapping terms may be distinguished by some traditions or some fiction writers. When such distinctions are made, sorcerers are more often practitioners of evocations or black magic, and there may be variations on level and type of power associated with each name.

Some names, distinctions, or aspects may have more of a negative connotation, than others, depending on the setting and the context.

For a combination of reasons, including those above, authors of fantasy fiction have often muddled the meaning of each of the terms (especially when the target audience is children), often using whatever term felt to be the most accurate, but the least controversial, though this is not always the case.

Numerous people have stated that they were magicians or wizards, or were commonly believed to be so at the time.

A wizard, in this case, is a person who claims to be skilled in arts considered hidden or arcane.

Throughout history, there have been many who have claimed that to have secret knowledge, meant having great, often supernatural, power. Some claimed to know occult (literally, "hidden") techniques that they felt could be of great aid.

Perhaps the oldest example of this is the knowledge of the making and tending of fire, a secret jealously guarded.

It should be noted that a person being attributed alleged magical power does not necessarily indicate the person is a wizard.

Some historical figures have also had magical powers attributed to them by legends and in fiction, with their actual abilities lost or unknown.

In modern use, the distinguishing aspect for wizards from other magicians is that their abilities were based off of knowledge, rather than faith. This is not to say that wizards did not invoke religion, but it was usually done through secret techniques and rituals as opposed to only prayer.

The "Atsinganoi", early Roma people as described in the time of Constantine IX, Heinrich Cornelius Agrippa (occult writer and alchemist), John Dee, Queen Elizabeth's court astrologist, and the controversial figure Aleister Crowley are among examples of these.