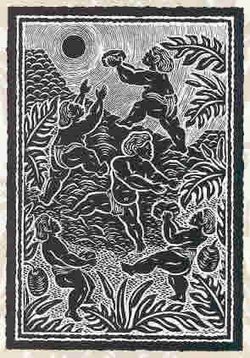 In Hawaiian mythology, the menehune are said to be a race of men, sometimes described as pygmies, who live in the deep forests and hidden valleys of the Hawaiian islands, far from the eyes of normal men. Their favorite food is the mai'a (banana).

The menehune were said to be superb craftsmen. Legends say that the menehune built temples, fishponds, roads, canoes, and houses. They are said to have lived in Hawaii before the human settlers arrived some 1500 years ago.

In Beckwith's Hawaiian Mythology, there are references to several other forest dwelling races: the nawao, the mu people and the wa people.

Some early scholars theorized that there was a first settlement of Hawai'i, by settlers from the Marquesas Islands, and a second, from Tahiti. The Tahitian settlers oppressed the "commoners", the manahune in the Tahitian language, who fled to the mountains and were called menahune. Proponents of this theory point to an an 1820 census of Kaua'i by Kamuali'i, its ruling chief of that island, which listed 65 people as menehune.

Folklorist Katherine Luomala believes that the legends of the Menehune are a post-European contact mythology created by adaption of the term manahune (which by the time of the settling of the Hawai'ian Islands had acquired a meaning of "lowly people") to European legends of brownies (Luomala 1951). Menehune are not mentioned in pre-contact mythology; the legendary "overnight" creation of the Alekoko fishpond, for example, finds its equivalent in the legend (Nordhoff 1874) about the creation of a corresponding structure on O'ahu, which was supposedly indeed completed in a single day - not by menehune, but, as a show of power, by a local ali'i who demanded every one of his subjects to appear at the construction site and assist in building.

In the experimental 1970s Aloha network developed at the University of Hawaii, the packet controllers were called Menehune, a pun on the equivalent IMP (Interface Message Processor) in the early ARPAnet.