In folklore and fairy tales, an ogre (feminine: ogress) are large humanoid creature who feed on human flesh. The word was first used (and probably invented) by Perrault in his Histoires ou Contes du temps passé (1697). 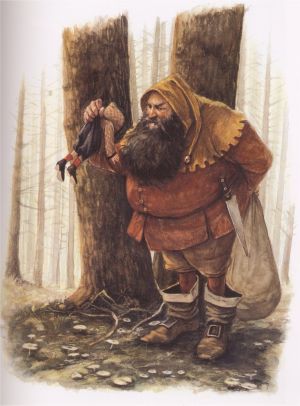 Meeting with an ogre in the forest

The word ogre is of French derivation, and was originally believed to have been coined by either Charles Perrault (1628-1703) or Marie-Catherine Jumelle de Berneville, Comtesse d' Aulnoy (1650-1705), both of whom were French authors. Other sources say that the name is derived from the word Hongrois, which means Hungarian.

Nowadays, the word is thought to have been actually inspired by the works of Italian author Giambattista Basile (1575-1632), who used the Neapolitan word uerco, in standard Italian orco. This word is documented in earlier Italian works (Fazio degli Uberti, XIV cent.; Luigi Pulci, XV; Ludovico Ariosto, XV-XVI) and has even older cognates with the Latin orcus and the Old English orcneas found in Beowulf lines 112-113, which inspired J.R.R. Tolkien's Orc. All these words may derive from a shared Indo-European mythological concept (as Tolkien himself speculated, as cited by Tom Shippey, The Road to Middle-earth, 45).

The first appearance of the word ogre in Perrault's work occurred in his Histoires ou Contes du temps Passé (1697). It later appeared in several of his other fairy tales, many of which were based on the Neapolitan tales of Basile. The first example of a female ogre being referred to as an ogress is found in his version of Sleeping Beauty, where it is spelled ogresse. The Comtesse d' Aulnoy first employed the word ogre in her story L'Orangier et l' Abeille (1698), and was the first to use the word ogree to refer to the creature's offspring.

The term is often applied in a metaphorical sense to disgusting persons who exploit, brutalize or devour their victim

An ogre is a large, mean and hideous humanoid monster, larger and broader than a man but somewhat shorter than a giant. In art, ogres are often depicted with a large head, abundant hair and beard, a huge belly, and a strong body. The term "ogre" can also mean a feared, over-authoritative, and abusive person. 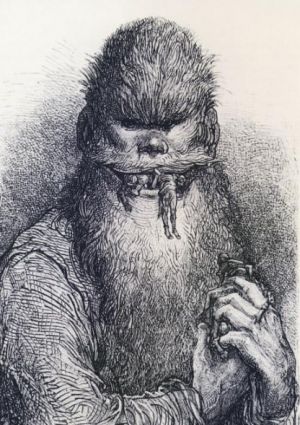 Ogres have appeared in many classic works of literature. Today, variants of ogres can be found in most modern fantasy games

Literature for children is rife with tales involving ogres and kidnapped princesses who were rescued by valiant knights and, sometimes, peasants. Ogres are also popular in fantasy fiction, such as C.S. Lewis's The Chronicles of Narnia, and in various fantasy games.

Part of this article consists of modified text from Wikipedia, and the article is therefore licensed under GFDL.
Retrieved from "https://www.monstropedia.org/index.php?title=Ogre&oldid=15834"
Categories: