The Pombéro is an goblin-like creature from Guaraní mythology. 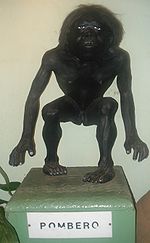 Pombero's original name in the Guaraní language is Kuarahy Jára, literally "Owner of the Sun", in spite of the fact that he is said to be a primarily nocturnal creature. In some parts of Argentina he is known primarily by the Spanish translation of his name, "Dueño del Sol".

Although accounts of the Pombero's appearance and nature vary slightly from one community to the next, he is usually described as being short and ugly, with hairy hands and feet. His hairy feet are said to give him the ability to walk without being heard. He is also often described as wearing a large hat and carrying a knapsack over his shoulder.

The Pombero generally dwells in rural areas, living in the forest, although he will sometimes choose to inhabit an abandoned house.

The Pombero is difficult, if not impossible, to detect due to his silent movements as well as other supernatural abilities, such as being able to turn invisible, squeeze through impossibly narrow spaces, or other such feats.

As a forest dweller, the Pombero is said to be able to imitate the sounds of various forest creatures. Many witnesses of the Pombero say that he is usually heard whistling before he appears. Most specifically it is believed that the Pombero can imitate birdsong, especially those of a nocturnal variety, and as such is viewed as something of a protector of the birds. One common aspect of the myth among various Guaraní based societies is that the Pombero protects the birds from children who hunt them with slingshots.

The Pombero is generally viewed as a harmless troublemaker. Owing to his preferred habitat of rural forests, the targets of his mischief tend to be rural farmers. Among his favourite activities are setting loose cattle, stealing eggs, chicken and honey, frightening horses and causing them to throw their riders off, as well as scattering corn, rice, or other provisions.

The Pombero is also often accused of impregnating single women either by a mere touch of his hand or by raping them in the night, and it is said that babies who are born ugly and hairy are likely the result of a visit from the Pombero. Another character from Guaraní mythology, the Kurupira, is blamed in a similar manner for unexpected or unexplained pregnancies.

It is said that one can keep the Pombero from engaging in such mischief by leaving gifts out for him, most specifically cigarettes and rum. Thus appeased, the Pombero will abstain from wreaking havoc upon one's home and possessions. In some areas it is believed that repeated giving of these gifts can cause the Pombero to become friendly, to the point where he will guard over one's home, animals, and possessions, and sometimes even leave gifts in return.

The Pombero tends to be the most widespread and pervasive of mythological figures among Guaraní speaking cultures today in the region spanning from northeast Argentina northward through the whole of Paraguay and southern Brazil. In rural Paraguay, for example, it is not uncommon for adults to fervently believe in this myth, to the extent that they leave gifts of rum and cigarettes for the Pombero nightly.