The Spear of Longinus has, at some point, been sheathed in layers of silver and gold.

According to Christian texts, the Spear of Destiny (also known as the Holy Lance, Holy Spear, Lance of Longinus, or Spear of Longinus) is the spear that is reported in the Gospel of John (19:31-37) as having pierced the side of Jesus during his crucifixion.

In the oldest known references to the legend, in the Gospel of Nicodemus (of uncertain date, possibly 5th or 6th century), the soldier who pierced Christ's side is identified with a centurion called Longinus (making the spear's "correct" Latin name Lancea Longini). Later Christian tradition, harking back to the novel The Spear by Louis de Wohl (1955), further identifies him as Gaius Cassius. It should be noted that there is a historical figure named Gaius Cassius Longinus, one of the conspirators responsible for the death of Gaius Julius Caesar. Another "Longinus" is credited with the authorship of the treatise On the Sublime. Roman names held little variety, especially among members of the same family.

There are many prototypes and analogues of the spear in other legends, it can be compared to the ancient Irish weapon, the Spear Luin, and is similar to the Bleeding Lance of Grail mythology, which was eventually claimed to be the Spear of Destiny.

There are several objects that are reputed to be the Spear of Destiny or Holy Lance (Heilige Lanze).

One such "Holy Lance" was allegedly unearthed by a Crusader named Peter Bartholomew in Antioch in 1098 while the Crusaders were under siege from the Seljuk Turks under Kerbogha. Peter Bartholomew reported that he had had a vision in which St. Andrew told him that the Holy Lance was buried in St. Peter's Cathedral in Antioch. At the time some were skeptical, but others were convinced. In any case, after much digging in the cathedral, Peter Bartholomew took a hand and, in a few moments, discovered the lance. For some of the Crusaders this was a marvelous discovery. At the same time, dissension had begun in the ranks of the Muslim army besieging the city. This combination of factors resulted in the Christian army being able to rout the Muslims a few days later when they joined battle, allowing the Crusaders to decisively capture Antioch. That object is now at Etschmiadzin in Armenia. Scholars believe that it is not actually a Roman lance but the head of a Roman standard.

Another of the many Spears of Destiny is the one in The Vatican. The earliest reports of that Spear were circa A.D. 570, described as having been on display in the basilica of Mount Zion in Jerusalem adjacent to the Crown of Thorns. The point of the spearhead was alleged to have been snapped following the Persian conquest of Jerusalem in A.D. 615. The point was set into an icon, and found its way to the church of Hagia Sophia in Constantinople. It was later transported to France, where it remained in the Sainte Chapelle until the 18th century. The icon was briefly moved to the Bibliotheque Nationale in Paris during the French Revolution, but it subsequently disappeared. The lower section of the spearhead was allegedly conveyed from Jerusalem to Constantinople sometime in the 8th century. It was sent by Sultan Beyazid II as a gift to Pope Innocent VIII in 1492; Innocent had the relic placed in St. Peter's Basilica in Rome. It still resides there. The Catholic Church makes no claim as to its authenticity. 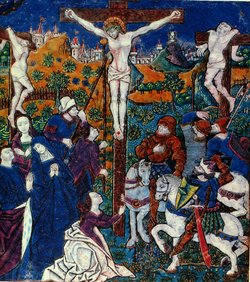 The piercing of Christ's side

The holy spear that was used by the Holy Roman Emperors (cited from Otto I, Holy Roman Emperor on, the one most often referred to) as a part of their imperial insignia found its way to Vienna, Austria, where they are kept in a museum. Dr. Robert Feather, of England, a metallurgist and technical engineering writer, tested that Holy Lance in January of 2003. He was given unprecedented permission not only to examine the Spear in a laboratory environment, but was also allowed to remove the delicate bands of gold and silver that hold it together. The silver band bears the inscription "Nail of Our Lord". It was added to the Holy Lance by order of Henry IV, the third German Holy Roman Emperor, in 1084. Around 1350 King Charles IV Of Bohemia had a golden sleeve put over the silver one, inscribed "Lance and Nail of the Lord."

In 1411 Sigismund was made Holy Roman Emperor. In 1424 he announced: "It is the Will of God that the Imperial Crown, Orb, Scepter, Crosses, Sword and Lance of the Holy Roman Empire must never leave the soil of the Fatherland." This collection of relics, known collectively as the Reichkleinodien or Imperial Regalia, were moved from his capital in Prague to his birth place, Nuremberg.

When the army of Napoleon Bonaparte approached Nuremberg in the spring of 1796 many were terrified that Napoleon would seize the Spear and rule the world with it. The city councilors decided to remove the Reichkleinodie to Vienna for safe keeping. The collection of relics was entrusted to one Baron von Hügel, who promised to return the objects as soon as peace had been restored and the safety of the collection assured.

The Holy Roman Empire was officially dissolved in 1806. Baron von Hugel took advantage of the confusion over who was the legal owner of the Reichkleinodie and sold the entire collection, including the Spear, to the Habsburgs. Baron von Hugel's perfidy did not come to light until after Napoleon's defeat at Waterloo. When the city councilors of Nuremberg asked for their treasures back the Austrian authorities' response was a curt rejection. And there they stayed until the Anschluss, when Adolf Hitler claimed the Spear of Destiny as his own[1].

Another purported Holy Lance has been in Krakow since at least the 1200s, though German records indicate that the lance was a copy made from the German lance under Henry II, Holy Roman Emperor, with a small sliver of the original embedded. Another copy was given to the Hungarian king at the same time.

Ravenscroft's The Spear of Destiny

Trevor Ravenscroft’s 1973 bestseller The Spear of Destiny has fixed his version of the legend in the minds of many today. He claims that Adolf Hitler started World War II to capture the spear, hypothesizing that Hitler's interest in the relic probably originated with his interest in the 1882 opera Parsifal — by Hitler’s favorite composer, Richard Wagner — which concerns a group of knights and their guardianship of the Holy Grail, as well as the recovery of the Spear. Though a number of historians cast doubt on Hitler's obsession with the Spear as it was reported by Trevor Ravenscroft et al, recent work by researcher and author Alec MacLellan has unearthed material from Ravenscroft's original source that seems to validate some of the stranger assertions.

Ravenscroft maintained that the spear came into the possession of the United States of America on April 30, 1945; specifically, under the control of the U.S. 3rd Army led by General George Patton. Later that day, supposedly in fulfillment of the legend that to lose the Spear meant death, Hitler committed suicide. Patton became fascinated by the ancient weapon and had its authenticity verified. Patton did not go on to use the spear, as orders came down from General Dwight Eisenhower that the complete Habsburg regalia including the Spear of Longinus were to be returned to the Hofburg Palace, where it remains today. It is interesting to note that George Patton, in his poem Through a Glass Darkly, curiously posits himself as Longinus in a previous lifetime[2].

Ravenscroft repeatedly attempted to define the mysterious “powers” that the legend says the Spear serves. He found it to be a hostile and evil spirit, which he variously referred to as the Antichrist and the Spirit of the Age. Smith and Piccard similarly attempt to identify what they too perceive as a malignant spirit reaching through the Spear. In a mishmash of quantum physics, Christianity, and the New Age they offer a handful of ideas, from the Spear channeling the “angry God of the Old Testament” (Jehovah) to it somehow transferring a part of The Crucifixion to the Spear, with the Spear becoming a Doppelgänger for the Holy Spirit, becoming, as they put it, an Unholy Spirit.

Dr. Howard A. Buechner, M.D., professor of medicine at Tulane University and then Louisiana State University, added a strange chapter to the tale in his two books on the Spear. He claims he was contacted by a former U-boat submariner who in turn claimed to have helped take the Spear of Destiny to Antarctica in 1945 and to have helped to recover it in 1979. Buechner was a retired Colonel with the U.S. Army who served in World War II, and had written a book on the Dachau massacre as a witness to the event. He was presented by the pseudonymous “Capt. Wilhelm Bernhart” with the log of the 1979 Hartmann Expedition and photos of some of the objects recovered.

According to Buechner, the Spear currently on display in the Schatzkammer in Vienna is a fake. He claims that he had evidence that Heinrich Himmler, head of the Occult Bureau of the SS, had formed a circle of Knights dedicated to the Holy Lance and further, had Japan's greatest swordsmaker create an exact duplicate of the lance. Buechner claimed that the duplicate went on display in Nuremberg while the real one was used in arcane black magic ceremonies in a specially appointed castle in Wewelsburg, Germany. Even wilder, he wrote that Hitler personally had selected Col. Maximilian Hartmann to send several of his most prized possessions, including the Spear of Destiny, and Hitler and Eva Braun's ashes to Antarctica. According to him Col. Hartmann recovered the Spear of Destiny from the ice in 1979 and it is now in hiding somewhere in Europe, in the possession of the Knights of the Holy Lance.

After contacting most of the members of the alleged expedition and others involved, including senior Nazi officials and close associates of Adolf Hitler, like Hitler Youth Leader Artur Axmann, Col. Buechner became convinced the claims were true and that he was either the victim of an elaborate hoax, or the Spear of Destiny really did reside for a while in Antarctica and may well be in the hands of one or more individuals who believe, as Col Hartmann may have said “the Holy Lance points ever towards our eternal Deutschland.”

Col. Buechner's story is examined and partially corroborated by both Alec Maclellan and the research/writing team of Jerry E. Smith and George Piccard. These writers focus on the mysterious surrenders of two U-boats to Argentine authorities months after the war’s end and how they may have been part of the “Fuehrer Convoy” taking high ranking Nazis and maybe treasure, to Argentina and/or Antarctica.

Spear legend meets Urban legend in the writings of the two conspiracy theory authors, Smith and Piccard. Their retelling of the Spear myth stretches from its purported creation in 3061 B.C. by Tubal-Cain, seventh generation grandson of Adam (the Spear was forged from a meteorite at the same time that he made the sword Excalibur), to Admiral Byrd’s battle (Operation Highjump) in the Antarctic against Nazis in their underground fortress in Neuschwabenland. Their version is replete with Nazi UFOs and the search for Atlantis. They connect the Thule Society (a Nazi secret society) to the Yale University Skull and Bones fraternity and the horrific events of September 11, 2001.

The Spear of Destiny in popular culture

The broad-based recognition factor enjoyed by the Spear of Destiny has helped to make it a prominent feature in contemporary culture, from movies and TV to video games.

Part of this article consists of modified text from Wikipedia, and the article is therefore licensed under GFDL.
Retrieved from "https://www.monstropedia.org/index.php?title=Spear_of_Destiny&oldid=12488"
Categories: