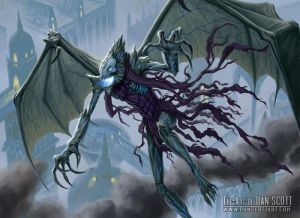 In Romanian mythology, strigoi (same form singular or plural) are either witches or the evil souls of the dead rising from the tombs (or living) that transform into an animal or phantom apparition.

Names are derived from striga, which in Romanian means witch or barn owl, cognate with Italian strega, which means witch, and descends from the Latin word strix, for a shrieking vampiric bird. Strigoi viu (plural: Strigoi vii) is a living vampiric witch. Strigoi mort (plural: Strigoi morti) is a dead (undead) vampire. They are most often associated with vampires or zombies.

Tudor Pamfile in his book Mitologie românească compiles all appellations of strigoi in Romania strâgoi, Moroi in western Transylvania, Wallachia and Oltenia,vidmă in ​​Bucovina, vârcolacul, Cel-rau, or vampire.

They can send out their soul at night to meet with other witches or with Strigoi mort, who are dead vampires.

How to become a strigoi?

A person born with a caul (a veil of fetal membrane still attached to the head), tail, born out of wedlock, died an unnatural death, or died before baptism, was doomed to become a vampire. As was the seventh child of the same sex in a family, the child of a pregnant woman who didn't eat salt or was looked at by a vampire, or a witch. And naturally, being bitten by vampire, meant certain condemnation to a vampiric existence after death.

Other people doomed to become a strigoi are:

Strigoi are not necessarily evil though they are feared for their appearance bodes ill and they are omens of misfortune and sickness.

How to ward off a Strigoi

In 1887, French geographer Élisée Reclus details the burials in Romania: "if the deceased has red hair, he is very concerned that he was back in the form of dog, frog, flea or bedbug, and that it enters into houses at night to suck the blood of beautiful young girls. So it is prudent to nail the coffin heavily, or, better yet, a stake through the chest of the corpse. "

How to kill a Strigoi

Part of this article consists of modified text from Wikipedia, and the article is therefore licensed under GFDL.
Retrieved from "https://www.monstropedia.org/index.php?title=Strigoi&oldid=16767"
Categories: