Tennin including the female tennyo are spirits found in Japanese Buddhism that are similar to Western angels or fairies. 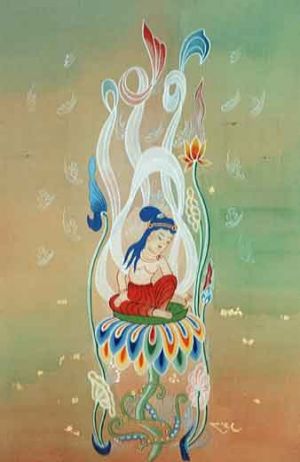 Tennin are mentioned in Buddhist sutras, and these descriptions form the basis for depictions of the beings in Japanese art, Japanese sculpture, and Japanese theater. They were imported from Chinese Buddhism, which was influenced itself by the concepts of heavenly beings found in Indian Buddhism and Chinese Taoism.

Come from the Sanskrit: apsaras

They are usually pictured as unnaturally beautiful women dressed in ornate, colorful kimonos (traditionally in five colors), exquisite jewelry, and flowing scarves that wrap loosely around their bodies. They usually carry Sacred lotus blossoms as a symbol of enlightenment or play instruments such as the biwa, drum, or flute.

Tennin can fly, a fact generally indicated in art by their colored or feathered kimonos, called hagoromo ("dress of feathers"). In some legends tennin are unable to fly without these kimonos (and thus cannot return to heaven), an idea that was perhaps influenced by Persian mythology. More rarely, they are shown with feathered wings. This is similar to the Western Swan May legends. In a Noh play |Hagoromo, for example, tennyo come to the earth and take off their hagoromo. A fisherman spies them and hides their clothes in order to force one to marry him. After some years he tells his wife what he did, and she finds her clothes and returns to heaven. The legend says it occurred in beach of Miyo, now a part of the city of Shizuoka, Shizuoka.

Tennin live in the Buddhist heaven as the companions to the Buddhas and Bodhisattvas.