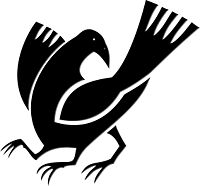 The three-legged bird (or tripedal bird) is a fabulous creature usually associated with the sun that can be found in various mythologies of Asia, Asia Minor, and North Africa.

The creature has been featured in myths from Egypt, where it appears on wall murals. It has also been found figured on ancient coins from Lycia and Pamphylia.

In Chinese mythology, the sun is in the form of a three-legged golden crow (金烏/金乌). According to folklore, there were originally ten sun birds, residing in a mulberry tree in the eastern sea; each day one of the sun birds would be rostered to travel around the world on a carriage, driven by Xihe (deity) the 'mother' of the suns.

Folklore also held that, at around 2170 BC, all ten sun birds came out on the same day, causing the world to burn; Houyi the archer saved the day by shooting down all but one of the sun birds. (

In Japanese mythology, the creature is a raven or a Jungle Crow called Yatagarasu (八咫烏), which is the bird of the sun goddess Amaterasu. The Yatagarasu appears in the Japanese ancient document called the Kojiki (古事記) where it was called upon to choke a beast attempting to devour the sun and as the protector to Emperor Jimmu. On many occasions, it appears in art as a three-legged bird, although there is no description stating that the Yatagarasu was three-legged in the Kojiki. The three-legged version of the Yatagarasu is used as the emblem of the Japan Football Association today.

Three-legged bird flanked by dragon and phoenix. Mural from the Goguryo period.

In Korean mythology, it is known as Samjogo Kari-sae (hangul: 삼족오; hanja: 三足烏). During the period of the Koguryo Kingdom, the Samjogo was a highly regarded symbol of power, thought superior to both the dragon and the Korean phoenix. The three-legged bird is one of several emblems under consideration to replace the phoenix in the Korean seal of state when it is revised in 2008. The Samjogo is considered a symbol of Goguryeo.

Part of this article consists of modified text from Wikipedia, and the article is therefore licensed under GFDL.
Retrieved from "https://www.monstropedia.org/index.php?title=Three-legged_bird&oldid=12585"
Categories: