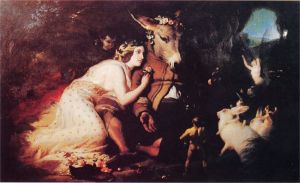 In traditional folklore, the fairy queen has no name. Shakespeare took the name 'Titania' from Ovid's '’Metamorphoses, where it is an appellation given to the daughters of Titans.

In the Shakespeare play, Titania is a very proud creature and as much of a force to contend with as her husband Oberon. The marital quarrel she and her husband are engaged in over which of them should have the keeping of a changeling page is the engine that drives the mix ups and confusion of the other characters in the play. Due to an enchantment cast by Oberon's henchman Puck, Titania magically falls in love with a rude mechanical that has been given the head of an ass.

Titania has appeared in many other paintings, poems, plays and even graphic novels; she has occasional cameo roles in Neil Gaiman's Sandman comic series, and is a major supporting character in The Books of Magic. In the mythology of those comic series, she is a mortal woman, who has lived and ruled in fairy land so long that no one remembers she once looked (and still is, under her magical seeming) human.