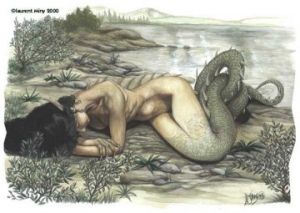 The Vouivre is an enormous female beast in French mythology.

The vouivre is a reptile from two to three meters long, having only one eye in its head, which shines like a jewel and is called the carbuncle. This jewel is regarded as of inestimable value, and those who can obtain one of these treasures become enormously rich. The vouivre removes her glowing eye when she bathes, making herself blind for just those minutes.

The Vouivre dwells in a cave and can breathe fire. It guards the treasure and devours people who come to stealth the treasure. In other versions, she lived in a river. Many of the legends deal with the robbery of the carbuncle from the vouivre, a crime which is frequently punishable by death or madness.