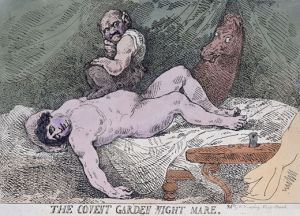 Mare in the word nightmare is not a female horse, but a mara, an Anglo-Saxon and Old Norse term for a demon that sat on sleepers' chests, causing them bad dreams. Dialect variants include the forms mara, mahr, mahrt, mårt, etc.

In High German, the demon who causes bad dreams is most often called an Alp, a word that is etymologically related to elf. A mare-induced bad dream is called a nightmare in English, martröð ( mare-ride) in Anglo-Saxon and Icelandic, mareridt (mare-ride) in Danish, mareritt (mare-ride) in Norwegian, and Alpdruck (alp-pressure) or Alptraum (alp-dream) in German.

The alp is a demonic being which presses upon sleeping people so that they cannot utter a sound. These attacks are called Alpdrücke (nightmares).

It is believed that the alp crushes animals to death. For example, if young geese, are placed in a pig pen and then die it is said that the alp crushed them to death. If rabbits die, and it appears that they have been crushed, a broom is placed in their pen, which protects them against the alp. Even though windows and doors may be tightly closed and locked to keep out the alps, they can still get in through the smallest holes, which they seek out with special pleasure.

How to Ward an Alp off

The name most often found in northern Germany ends with a pronounced "t," and can be grammatically either masculine or feminine. The compound "nightmårt" is also very common. The forms "mår" (masculine) and "måre" (feminine) also exist. The designation "alp" is recognized as well.

How to Ward a Mart Off

The mårt can be captured by grasping it with an inherited glove or by closing up all of the room's openings as soon as the sleeping person begins to groan.

One day, after she had borne him three children, she was with him in his workshop, when he said to her, "Look, that is where you came in!" and he opened the hole that had been stopped up until now. The woman suddenly turned into a cat, ran out through the opening, and she was never seen again.

The alp, or as it is most often called, the "märt," is frequently encountered in Pomerania, historic region currently set in the Northwest of Poland. A märt rides on sleeping people at night, pressing against them until at last they can no longer breathe. A märt is usually a girl who has a bad foot. Once in the village of Bork near Stargard there was a smith who had a daughter with a bad foot, and at that time an unusually large number of people complained that they were being ridden by a märt.

Stargard is the German name for the Szczecin, a Polish city on the Ina River.

Vanlandi, King of Sweden, and Huld, the Witch Woman', from the Ynglinga Saga of Snorri Sturluson. Svegdir's son was named Vanlandi, and he took the kingdom after him and ruled over the Wealth of Uppsala. He was a great warrior and went far over the land. He had stayed one winter in Finland with Snæ the Old, and there married his daughter Driva. In the spring he went away, whilst Driva stayed behind, and he promised to come back after three winters, but he came not for ten winters. Then Driva had Huld the witch woman called to her, and sent Visbur, hers and Vanlandi's son, to Sweden. Driva paid Huld the witch woman to draw Vanlandi to Finland with sorcery or else to kill him. When the spell was being furthered, Vanlandi was in Uppsala, and he had a longing to go to Finland, but his friends and advisers forbade him, and said that it certainly was Finnish witchcraft which caused his wanderlust. Then he became sleepy and said that the Mare was treading on him. His men sprang up and would help him, but when they came to his head she trod on his feet, so that they were nigh broken; then they resorted to the feet, but then she smothered the head, so that he died there. The Swedes took his body and burned it near a river which was called Skuta; there was his standing-stone set up.