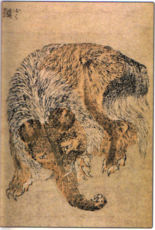 A baku by Katsushika Hokusai.

Baku (獏 or 貘, also known as "dream eaters") are spirits found in Chinese and Japanese mythology that devour dreams and nightmares.

Baku is akin to chimeras, either with the head of an elephant and the body of a lion or with the head of a lion, the body of a horse, the tail of a cow, and the legs and feet of a tiger. Alternatively, they may be more pig or tapir-like creatures that range in color from black to pink. Several evil dreams are mentioned in ancient Japanese books, such as two snakes twined together, a fox with the voice of a man, blood-stained garments, a talking rice-pot, and so on.

Baku are generally benign creatures who aid human being s by eating nightmares or the evil spirits that cause such dreams. Sometimes they do this unbidden, but other legends require a nightmare sufferer to awaken and call upon a baku to eat his dreams. According to some beliefs, baku can change eaten dreams to good luck.

When a dream is bad, you can speak from within the dream if you have the presence of mind, or once you wake up distraught utter the appeal, "Baku, devour this dream!" Baku will then come and eat your bad dream, leaving you to have a pleasant sleep from then on. Because of this, he is probably one of the better-known youkai, since of course parents tell their children about baku to reassure them before they go to sleep.

Other tales make the baku more troublesome, eating all dreams and thus depriving sleepers of their beneficial effects, or simply awakening sleepers and depriving them of sleep in general.

How to Ward a Baku Off

Baku are almost always seen as beneficial, however, and pictures of the creatures are often placed in Japanese bedrooms to help ward off bad dreams (in modern times, baku toys and plush dolls may be used instead). In addition, people sometimes write the Chinese character for "baku" on pillowcases. In the Edo era, pillows with a baku depiction were sold widely.

The traditional Japanese nightmare-devouring baku originates in Chinese folklore and was familiar in Japan as early as the Muromachi period (14th-15th century). Hori Tadao (2005) has described the dream-eating abilities attributed to the traditional baku and relates them to other preventatives against nightmare like the use of amulets. Kaii-Yokai Densho Database, citing a 1957 paper, and Mizuki (2004) also describe the dream-devouring capacities of the traditional baku.