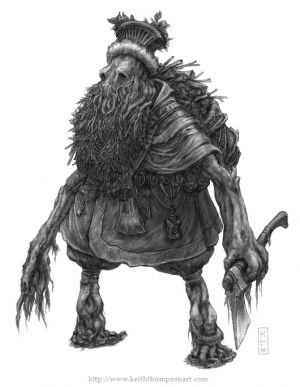 Leshy is analogous to the Woodwose of Western Europe, the Green Man of Britain and the Basajaun of the Basque Country.

Leshii means Forest lord from "les", the slavic for forest. There are also leshachikha/leszachka (wives of the leszy) and leshonky (children of the leszy). Boruta has been related to the Slavic terms barč (beehive) and bartnik (bee-master), a figure who, in some people, had functions similar to those of a shaman.

Leshi often appeared as a tall peasant, either without a belt or with shoes on the wrong feet. Sometimes he was said to have wings and a tail and be covered in black hair. Many assigned him goat's hooves and horns like Pan. He has pale white skin that contrasts with his bright green eyes and usually carry a club to show his power over the forest creatures.

He could change his size from that of a blade of grass to that of the highest tree. The Leshi could take the shape of a familiar person and lead you astray with the sound of their voice. He could also become a hare, wolf, bear, raven, pig, horse, rooster, flaming fir tree or even a large talking mushroom.

The Leshi is fond of trees and is said to be heard weeping when one is cut down. He is also said to live in deep caves that lie in the mountain areas.

A leszy has a close bond with the wolf, and is often seen in the company of bears as well. In myth and art, the Leshy is often associated with the psychotropic mushroom Amanita Muscaria. This may connect him in some way to Shamanic mind-altering techniques.

In his evil form, Leshi became a terribly mischievous being that could imitate voices of people familiar to wanderers and lure them back to his caves, where he would tickle them to death. He has many tricks, including leading peasants astray, making them sick, or tickling them to death. He is also known to hide the axes of woodchoppers.

Upon entering a forest, one always uttered a protective spell or prayer lest they run into him. Should one ever encounter Leshi, one must thwart him immediately by turning all your clothes inside out and backwards as well as the collar of one's horse, and placing your shoes on the opposite feet. Other remedies include the sign of the cross or singing "Sheep's mug, sheep's wool", but in the worst extremity, setting the forest ablaze behind you should grow him so concerned with putting out the fire that he will forget why his mischief fell upon your poor soul.

If he got hold of a child, he might replace it with one of his own (a changeling), who would grow up stupid, with a voracious appetite. If the child returned it would ever afterward be a useless tramp. When the leshi got his hands on an adult, the adult would return sometimes mute and covered with moss, othertimes unable to concentrate and would act oddly for the rest of their lives.

The Leshi likes offerings of kasha, suet, blini, bread & salt. He is also perfectly happy with a cookie or candy left on a stump or log. To protect against the leshi, one should turn all his clothing backward chant or get him to laugh.

When the leshi could be coaxed to befriend a human, the human often had to make a pact, never again wear a cross or take the eucharist. In return, the Leshy would teach the human the secrets of magic. Sometimes cow herders will make pacts with Lechies by handing him their cross from around their neck and sharing communion with him after Christian church gatherings, these pacts are said to give the cowsmen special powers.

Leshi or Boruta would be the negative inversion of the God Borevit, subsequent to the introduction of Christianity in the Slavic peoples. Borevit is also portrayed as an imposing figure, with horns over the head, surrounded by packs of wolves and bears.

Leshy as a demon

Lechies were Russian demons that lived in the woods. They had human bodies from the waist up with the horns, ears, and beard of a she-goat. From the waist down, they had a goat's body. They would shrink themselves to the height of the grass when marching through fields, but would grow to the size of the tallest trees when they ran through the forest. They had horrible cries, but could imitate voices familiar to wanderers & could lure them back to their caves, where they would tickle them almost to death.