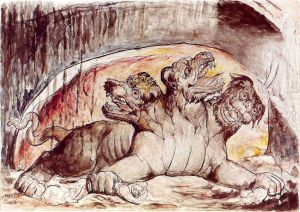 Cerberus was the guardian hound of Hades, the Greek Underworld, and a faithful servant of Hades (the god who ruled that gloomy realm). He was represented as a grotesque dog who had three heads, all of which snarled at those foolish enough to attempt to leave the Underworld; the hound was also said to sport the tail of a snake.

According to legend, Cerberus was one of the monsters born from the union of Echidna and Typhon, both as monstrous and hideous as their offspring. Echidne was half-woman, half-serpent, while Typhon was the most fierce of all creatures.

Among his brothers, the most famous are Hydra, Chimera, and Orthrus.

According to Horace, Cerberus possessed one hundred heads. Hesiod wrote that he had fifty, while most sources agree to only three. The center head was in the shape of a lion, while the other two were in the shape of a dog and a wolf, respectively. He also had a dragon's tail and a thick mane of writhing snakes.

Virgil described him by saying:

The Guardian Hound and Hercules

Hercules' final labour was to capture Cerberus. After having been set the task, Hercules went to Eleusis to be initiated into the Eleusinian Mysteries so that he could learn how to enter and exit the underworld alive, and in passing absolve himself for killing centaurs. He found the entrance to the underworld at Tanaerum, and Athena and Hermes helped him to traverse the entrance in each direction. He passed Charon thanks to Hermes' insistence, and his own heavy and fierce frowning. Whilst in the underworld, Hercules freed Theseus but the earth shook when he attempted to liberate Pirithous, so he had to leave him behind. They had been imprisoned by Hades, by magically binding them to a bench, because they had attempted to kidnap Persephone. The magic was so strong that when Hercules pulled Theseus free, part of Theseus' thighs remained on the bench, explaining why his descendants had notably lean thighs. Hercules presented himself before the throne of Hades and Persephone and asked permission to take Cerberus, to which the gods agreed as long as Hercules does not harm the hound. Some say, Persephone gave her full consent because Heracles was her own brother. In either case, Hercules wrestled the dog into submission and dragged it out of Hades, passing through a cavern entrance in the Peloponnese. When he returned with Cerberus to the palace of Eurystheus, the man who had assigned the task to Hercules, Eurystheus was so afraid of the fearsome beast that he jumped into a pithos (large storage jar) to hide.

Cerberus and his defeats

Cerberus’ three heads relate to the threefold symbol of the baser forces of life. They represent the past, the present and the time yet to come.

Cerberus is the watchdog of Hell. He is often pictured with Hades, his master. He can be found on the banks of the river Styx, where he had the task of eating any mortals who attempted to enter, and any spirits who attempted to escape.

Cerberus is featured in several mythological stories in his role as the watchdog of Hades. Perhaps the best known involves the vigorous hero Hercules (or Herakles).

Cerberus has become an archetype for a protector, particularly the protector of a gate, door or boundary (as opposed to a personal protector). In this guise Cerberus features widely in fiction and cultural works from the Middle Ages (in Dante's Divine Comedy, in Canto VI of Inferno (third circle)) to the modern time (J. K. Rowling's Harry Potter and the Philosopher's Stone, in the character of Fluffy) and a number of modern security and warfare-related artifacts named after it.

Cerberus and other hounds

A similar dog, '"Garm'", is guarding the house of deaths in the Norse mythology. These monsters were all probably inspired from the dogs that haunted the battlefields in the dark of the night, feasting on the bodies of the fallen warriors.

Part of this article consists of modified text from Wikipedia, and the article is therefore licensed under GFDL.
Retrieved from "https://www.monstropedia.org/index.php?title=Cerberus&oldid=14466"
Categories: