Giant squid, once believed to be mythical creatures, are squid of the Architeuthidae family. They are deep sea dwellers that can grow up to the size of a bus being the largest cephalopod (octopus, cuttlefish, squid) and the largest mollusk on Earth. 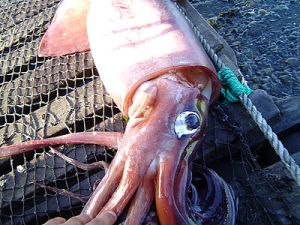 Picture of a small specimen

The taxonomy of the giant squid, as with many cephalopod genera, has not been resolved. The rarity of observations of specimens and the extreme difficulty of observing them alive, tracking their movements, or studying their mating habits prevent a complete understanding. Lumpers and splitters may propose as many as eight species or as few as one without much genetic or physical basis. The broadest list is:

In Cephalopods: A World Guide (2000), Mark Norman writes the following:

"The number of species of giant squid is not known although the general consensus amongst researchers is that there are at least three species, one in the *Atlantic Ocean (Architeuthis dux), one in the Southern Ocean (A. sanctipauli) and at least one in the northern Pacific Ocean (A. martensi)." 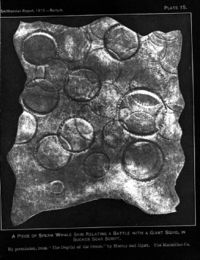 The researchers state "Although mating has never been observed in giant squid, it is thought that what happens is that the male injects his sperm packages into the female's arms. The process is likely to be a fairly violent affair as the female is probably not that keen on being injected. This is a problem for the amorous male as females are normally a third bigger than they are.

"But males get round their inferior size by being endowed with a particularly long penis, which means they can inject the female without having to get too close to her chomping beak. The male's sexual organ is actually a bit like a high-pressure fire hose and is normally nearly as long as his body - excluding legs and head.

"But having such a big penis does have one drawback: it seems that co-ordinating eight legs, two feeding tentacles and a huge penis, whilst fending off an irate female, is a bit too much to ask, and one of the two males stranded on the Spanish coast had accidentally injected himself with sperm packages in the legs and body. And this does not seem to have been an isolated incident since two of the eight males that had stranded in the north-east Atlantic before had also accidentally inseminated themselves."

GIANT squid are not the only members of the natural world to display unusual sexual behaviour. In Australia, the male Yellow-footed Antechinus - a mouse-like marsupial - goes through such a frenzy of mating that they die of sexual stress. The female praying mantis often eats her partner during or after sex, while homosexual behaviour is also known in geese, ostriches, cichlid fish, rats and monkeys.

The fabled underwater encounter between the sperm whale and giant squid, from a diorama at the American Museum of Natural History.

Giant squid are very widespread, occurring in all of the world's oceans. They are usually found near continental and island slopes from the North Atlantic Ocean, especially Newfoundland, Norway, the northern British Isles, and the oceanic islands of the Azores and Madeira, to the South Atlantic around southern Africa, the North Pacific around Japan, and the southwestern Pacific around New Zealand and Australia. Specimens are rare in tropical and polar latitudes. Adults are found deep in the ocean, 200 to 1,000 meters (700 to 3,300 feet) (These are called the "epipelagic" and "mesopelagic" zones). Also found at the bottom in the bathyal zone - which can be 4,000 meters (13,300 feet) deep. Its biological system is not compatible with warm water, most specimens that have been found have probably been too close to the surface and died.

Tales of giant squid have been common among mariners since ancient times, and may have led to the Norwegian legend of the kraken, a tentacled sea monster as large as an island capable of engulfing and sinking any ship. Japetus Steenstrup, the describer of Architeuthis, suggested a giant squid was the species described as a sea monk to the Danish king Christian III c.1550. The Lusca of the Caribbean and Scylla in Greek mythology may also derive from giant squid sightings. Eyewitness accounts of other sea monsters like the sea serpent are also thought to be mistaken interpretations of giant squid. 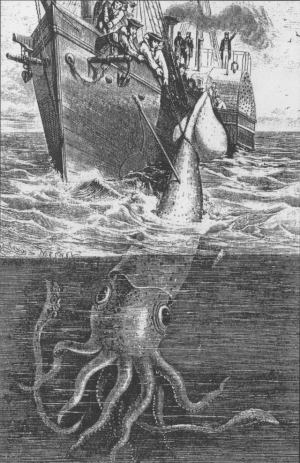 The Alecton attempts to capture a giant squid in 1861 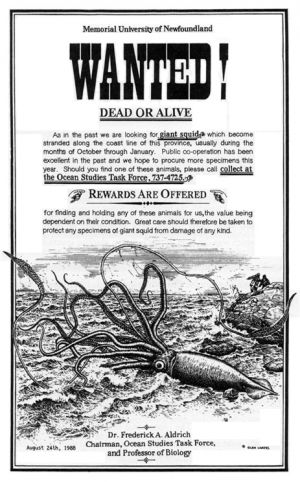 Poster issued in 1988 by Frederick Aldrich of the Memorial University of Newfoundland. Rewards were offered for public cooperation in obtaining giant squid specimens.

File:Giantsquidphoto2.jpg
One of the series of images of a live giant squid taken by Kubodera and Mori in 2004.

Among other things, the observations demonstrate actual hunting behaviors of adult Architeuthis, a subject on which there had been much speculation. The photographs showed an aggressive hunting pattern by the baited squid, leading to it impaling a tentacle on the bait ball's hooks. This may disprove the theory that the giant squid is a drifter which eats whatever floats by, rarely moving so as to conserve energy. It seems that the species has a much more belligerent feeding technique. 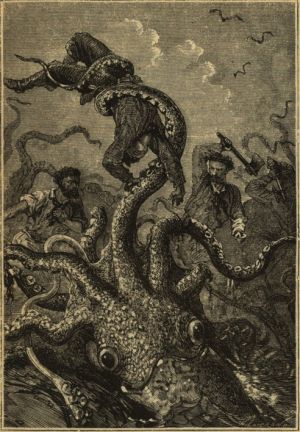 An illustration from the original edition of Twenty Thousand Leagues Under the Sea depicting a giant squid.

The elusive nature of the giant squid and its terrifying appearance have firmly established its place in the human imagination. Representations of the giant squid have been known from early legends of the Kraken through books such as Moby-Dick and Twenty Thousand Leagues Under the Sea to modern animated television programs.

In particular, the image of a giant squid locked in battle with a sperm whale is a common one, although the squid is, in fact, the whale's prey and not an equal combatant.