The concept of a homunculus (Latin for "little man", sometimes spelled "homonculus," plural "homunculi") usually refers to a small creature constructed (often by way of mystical means) from numerous organic components. The term is often used to illustrate the functioning of a system. 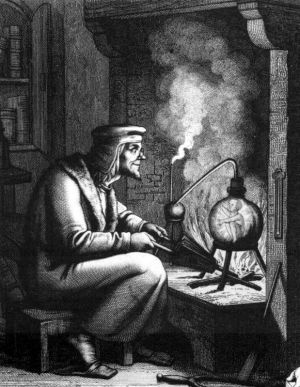 The term appears to have been first used by the alchemist Paracelsus. He once claimed that he had created a false human being that he referred to as the homunculus. The creature was to have stood no more than 12 inches tall, and did the work usually associated with a golem. However, after a short time, the homunculus turned on its creator and ran away. The recipe consisted of a bag of bones, sperm, skin fragments and hair from any animal of which the homunculus would be a hybrid. This was to be laid in the ground surrounded by horse manure for forty days, at which point the embryo would form.

There are also variants cited by other alchemists. One such variant involved the use of the mandrake. Popular belief held that this plant grew where semen ejaculated by hanged men (during the last convulsive spasms before death) fell to the ground, and its roots vaguely resemble a human form to varying degrees.

The root was to be picked before dawn on a Friday morning by a black dog, then washed and "fed" with milk and honey and, in some prescriptions, blood, whereupon it would fully develop into a miniature human which would guard and protect its owner.

Yet a third method, cited by Dr. David Christianus at the University of Giessen during the 18th century, was to take an egg laid by a black hen, poke a tiny hole through the shell, replace a bean-sized portion of the white with human sperm, seal the opening with virgin parchment, and bury the egg in dung on the first day of the March lunar cycle. A miniature humanoid would emerge from the egg after thirty days, which would help and protect its creator in return for a steady diet of lavender seeds and earthworms.

The term homunculus was later used in the discussion of conception and birth. In 1694, Nicolas Hartsoeker discovered "animalcules" in the sperm of humans and other animals. Some claimed that the sperm was in fact a "little man" (homunculus) that was placed inside a woman for growth into a child; these later became known as the spermists. This seemed to neatly explain many of the mysteries of conception (for instance, why it takes two). However it was later pointed out that if the sperm was a homunculus, identical in all but size to an adult, then the homunculus may have sperm of its own. This led to a reductio ad absurdum, with a chain of homunculi "all the way down." This was not necessarily considered a fatal objection however, as it neatly explained how it was that "in Adam" original sin the whole of humanity was already contained in his loins. Nevertheless, as atomic theory became prominent, the theory fell from favor. The improvement of microscopy eventually buried the theory.

The sensory and motor homunculi

The concept of a homunculus (Latin for “little man,” sometimes spelled “homonculus”) is often used to illustrate the functioning of a system. In the scientific sense of an unknowable prime actor, it can be viewed as an entity or agent.

The Greeks, including Hippocrates, pondered heredity. They devised a theory of “pangenesis,” which claimed that sex involved the transfer of miniaturized body parts: “Hairs, nails, veins, arteries, tendons and their bones, albeit invisible as their particles are so small. While growing, they gradually separate from each other.” This idea enjoyed a brief renaissance when Charles Darwin, desperate to support his theory of evolution by natural selection with a viable hypothesis of inheritance, put forward a modified version of pangenesis in the second half of the nineteenth century. In Darwin's scheme, each organ—eyes, kidneys, bones—contributed circulating “gemmules” that accumulated in the sex organs and were ultimately exchanged in the course of sexual reproduction.

Because these gemmules were produced throughout an organism's lifetime, Darwin argued any change that occurred in the individual after birth, like the stretch of a giraffe's neck imparted by craning for the highest foliage, could be passed on to the next generation. Ironically, then, to buttress his theory of natural selection Darwin came to champion aspects of Lamarck's theory of inheritance of acquired characteristics—the very theory that his evolutionary ideas did so much to discredit.

Darwin was invoking only Lamarck's theory of inheritance; he continued to believe that natural selection was the driving force behind evolution but supposed that natural selection operated on the variation produced by pangenesis. Had Darwin known about Mendel's work (although Mendel published his results shortly after The Origin of Species appeared, Darwin was never aware of them), he might have been spared the embarrassment of this late-career endorsement of some of Lamarck's ideas.

Whereas pangenesis supposed that embryos were assembled from a set of minuscule components, another approach, “preformationism,” avoided the assembly step altogether: either the egg or the sperm (exactly which was a contentious issue) contained a complete preformed individual called a homunculus. Development was therefore merely a matter of enlarging this into a fully formed being.

In the days of preformationism, what we now recognize as genetic disease was variously interpreted: sometimes as a manifestation of the wrath of God or the mischief of demons and devils; sometimes as evidence of either an excess of or a deficit of the father's “seed”; sometimes as the result of “wicked thoughts” on the part of the mother during pregnancy. On the premise that fetal malformation can result when a pregnant mother's desires are thwarted, leaving her feeling stressed and frustrated, Napoleon passed a law permitting expectant mothers to shoplift. None of these notions, needless to say, did much to advance our understanding of genetic disease.

Fetiform teratoma (homunculus) is a term that has been given to a rare form of teratoma that resembles a malformed fetus. There are very few reported cases in the English-language literature of this entity. Since the discovery of this well organized and highly differentiated mature cystic teratoma, there has been a lively discussion and fascination as to its pathogenicity. This tumor must be distinguished from fetus-in-fetu, a parasitic monozygotic twin usually found inside the body of a newborn or infant, and an ectopic pregnancy.

The term appears to have been first used by the alchemist Paracelsus. He once claimed that he had created a false human being that he referred to as the homunculus. The creature was to have stood no more than 12 inches tall and did the work usually associated with a golem (in Jewish folklore, a golem [sometimes pronounced goilem] is an animated being crafted from inanimate material; the name appears to derive from the word gelem, which means “raw material”). However, after a short time, the homunculus turned on its creator and ran away. The recipe consisted of a bag of bones, sperm, skin fragments, and hair from any animal of which the homunculus would be a hybrid. This was to be laid in the ground surrounded by horse manure for 40 days, at which point the embryo would form.

The homunculus argument in philosophy of mind

Today the term is used in a number of ways to describe systems that are thought of as being run by a "little man" inside. For instance, the homunculus continues to be considered as one of the major theories on the origin of consciousness, that there is a part (or process) in the brain whose purpose is to be "you". The homunculus is often invoked in cybernetics as well, for similar reasons.

A homunculus argument should be phrased in such a way that the conclusion is always that if a homunculus is required then the theory is wrong. After all, homunculi do not exist.

Very few people would propose that there actually is a little man in the brain looking at brain activity. However, this proposal has been used as a 'straw man' in theories of mind. Gilbert Ryle (1949) proposed that the human mind is known by its intelligent acts. He argued that if there is an inner being inside the brain that could steer its own thoughts then this would lead to an absurd repetitive cycle or "regress" before a thought could occur:

"According to the legend, whenever an agent does anything intelligently, his act is preceded and steered by another internal act of considering a regulative proposition appropriate to his practical problem. . . . Must we then say that for the agent . . . reflections how to act to be intelligent he must first reflect how best to reflect how to act? The endlessness of this implied regress shows that the application of the appropriateness does not entail the occurrence of a process of considering this criterion."

If the homunculus argument is applied to the problem of the "intelligent agent" a subtly different result from the regress argument occurs. The homunculus argument applied to Ryle's theory would be phrased in terms of whether the mental attribute of 'reflecting upon things internally' can be explained by the theory that 'the mind is intelligent acts' without the appearance of a homunculus. The answer, provided by Ryle's own logic, is that internal reflection would require a homunculus to prevent it from becoming an infinite regress. Therefore with these assumptions the Homunculus Argument does not support the theory that mind is wholly due to intelligent acts.

The example of Ryle's theory demonstrates another aspect of the Homunculus Argument in which it is possible to attribute to the mind various properties such as 'internal reflection' that are not universally accepted and use these contentiously to declare that a theory of mind is invalid.

The idea of the homunculus has proven to be fruitful inspiration. Homunculi can be found in centuries' worth of literature. These literary references have spawned references in modern times in film, animation, video and card games.

I am not of Paracelsus minde that boldly delivers a receipt to make a man without conjunction...., (Part 1:36)

Other uses of the name "homunculus"