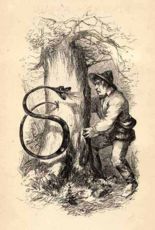 The hoop snake is a legendary creature of the United States and Australia.

The hoop snake is referred to in the Pecos Bill stories and although it is his description of hoop snakes that most people are familiar with, stories of the creature predate those fictional tales considerably.

According to folklore the distinguishing feature of a hoop snake is that it can grasp its tail in its jaws and roll after its prey like a wheel, thus looking somewhat like the ouroboros of Greek mythology, or Tsuchinoko in Japan.

The hoop snake is far more venomous than any diamondback rattler. It has a stinger on its tail and anything that stinger touches can be sent straight to the undertaker's. Hoop snakes can kill a 200-pound man, or a 2,000-pound bull. In one version of the myth, the snake straightens out at the last second, skewering its victim with its venomous tail. The only escape is to hide behind a tree which receives the deadly blow instead and promptly dies from the poison.

As other serpents crawl upon their bellies, so can this; but he has another method of moving peculiar to his own species, which he always adopts when he is in eager pursuit of his prey; he throws himself into a circle, running rapidly around, advancing like a hoop, with his tail arising and pointed forward in the circle, by which he is always in the ready position of striking. It is observed that they only make use of this method in attacking; for when they fly from their enemy they go upon their bellies, like other serpents. From the above circumstance, peculiar to themselves, they have also derived the appellation of hoop snakes.

Several sightings of the hoop snake have been alleged along the Minnesota-Wisconsin border in the St. Croix River valley and other are occasionally reported, even though the existence of the hoop snake has never been accepted by the scientific community. Naturalist Raymond Ditmars placed $10,000 in trust at a New York bank for the first person to provide evidence of a hoop snake. The last hoop snake in Hoot Owl Hollow was killed in 1963.

Some cryptozoologists feel that is a distorted description of the sidewinder of the American southwest, or of mud snakes which will occasionally lie in a loose hoop shape.

Part of this article consists of modified text from Wikipedia, and the article is therefore licensed under GFDL.
Retrieved from "https://www.monstropedia.org/index.php?title=Hoop_snake&oldid=11612"
Categories: