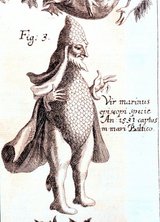 Mermen are mythical male legendary creatures who are human from the waist up and fish-like from the waist down, whose consorts were their female counterparts, the more commonly known mermaids. In Greek mythology, mermen were often illustrated to have green seaweed-like hair, a beard, and a trident.

The actions and behavior of mermen can vary wildly depending on the source and time period of the stories. They have been said to sink ships by summoning great storms, but also said to be wise teachers, according to earlier mythology. A merman, like a mermaid, attracts humans with singing and tones.

Part of this article consists of modified text from Wikipedia, and the article is therefore licensed under GFDL.
Retrieved from "https://www.monstropedia.org/index.php?title=Merman&oldid=8694"
Categories: