Oceanus (Greek Okeanos, Ωκεανός), was the world-ocean, which the Greeks and Romans believed to be an enormous river encircling the world. Strictly speaking, Okeanos was the ocean-stream at the Equator in which floated the habitable hemisphere (oikoumene).[1] In Greek mythology, this world-ocean was personified as a Titan, a son of Uranus and Gaia. In Hellenistic and Roman mosaics, this Titan was often depicted as having the upper body of a muscular man with a long beard and horns, and the lower torso of a serpent (cf. Typhon). On a fragmentary archaic vessel (British Museum 1971.11-1.1) of ca 580 BCE, among the gods arriving at the wedding of Peleus and the sea-nymph Thetis, is a fish-tailed Oceanus, with a fish in one hand and a serpent in the other, gifts of bounty and prophecy. In Roman mosaics he might carry a steering-oar and cradle a ship.

Some scholars believe that Oceanus originally represented all bodies of salt water, including the Mediterranean Sea and the Atlantic Ocean, the two largest bodies known to the ancient Greeks. However, as geography became more accurate, Oceanus came to represent the stranger, more unknown waters of the Atlantic Ocean (also called the "Ocean Sea"), while Poseidon ruled over the Mediterranean.

Oceanus' consort is his sister Tethys, and from their union came the ocean nymphs, also known as the three-thousand Oceanids, and all the rivers of the world, fountains, and lakes. From Cronus, of the race of Titans, the Olympian gods have their birth, and Hera mentions twice in Iliad book iv her intended journey "to the ends of the generous earth on a visit to Okeanos, whence the gods have risen, and Tethys our mother who brought me up kindly in their own house." 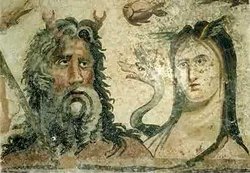 In the Iliad, the rich iconography of Achilles' shield, which was fashioned by Hephaestus, is enclosed, as the world itself was believed to be, by Oceanus:

"Then, running round the shield-rim, triple-ply,
he pictured all the might of the Ocean stream."

When Odysseus and Ajax walk together along the shore of the sounding sea (Iliad vi) their prayers are addressed "to the great Sea-god who girdles the world." It is to Oceanus, not to Poseidon, that their thoughts are directed.

Invoked in passing by poets and figured as the father of rivers and streams, thus the progenitor of river gods, Oceanus appears only once in myth, as a representative of the archaic world that Heracles constantly threatened and bested. Herakles forced the loan from Helios of his golden bowl, in order to cross the wide expanse of the Ocean on his trip to the Hesperides. When Oceanus tossed the bowl, Heracles threatened him and stilled his waves. The journey of Heracles in the sun-bowl upon Oceanus was a favored theme among painters of Attic pottery.

Oceanus appears in Hellenic cosmography as well as myth. Cartographers continued to represent the encircling equatorial stream much as it had appeared on Achilles' shield.[2]

Though Herodotus was skeptical about the physical existence of Oceanus, he rejected snowmelt as a cause of the annual flood of the Nile river; according to his translator and interpreter, Livio Catullo Stecchini, he left unsettled the question of an equatorial Nile, since the geography of Sub-Saharan Africa was unknown to him.