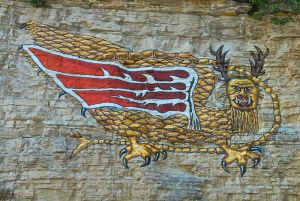 A modern painting of the Piasa Bird, on the bluffs of the Mississippi River in Alton. Wings were not present in the original painting.

The Piasa or Piasa Bird is a legendary creature that was depicted in a mural painted by Native Americans on a cliff above the Mississippi River.

The name "Piasa", pronounced in English /ˈpajəˌsɑː/ or "pie-uh-saw", is from the Miami-Illinois word páyiihsa (cf. Anishinaabe: apa'iins(ag), "little people(s)"), the name for a type of small supernatural dwarves said to attack travelers. The connection between this Miami-Illinois word and the Piasa illustration is confirmed by such early French transcriptions as paillissa, found on Nicolas de Finiel's map of 1798. (See Costa 2005: 297). Etymologies which claim that the word "Piasa" means "the bird that devours men" or "bird of the evil spirit" are fabricated, and have no relation with the Illinois language. The creature depicted in the mural was first referred to as the Piasa Bird in an article published in 1836 by John Russell of Bluffdale, Illinois. The article was entitled "The Bird That Devours Men."

The mural was created prior to the arrival of any European explorers in Jersey County near present day Elsah, Illinois. The original Piasa illustration no longer exists; a newer version, based partly on 19th century sketches and lithographs, has been placed in Alton, Illinois, several miles southeast of the original location. The original Piasa was likely a representation of a local guardian spirit or a depiction of the Ouroboros symbol.

In 1673, Father Jacques Marquette discovered the painting on a limestone bluff overlooking the Mississippi River while exploring the area. He recorded the following description of his discovery:

"While Skirting some rocks, which by Their height and length inspired awe, We saw upon one of them two painted monsters which at first made Us afraid, and upon Which the boldest savages dare not Long rest their eyes. They are as large As a calf; they have Horns on their heads Like those of a deer, a horrible look, red eyes, a beard Like a tiger's, a face somewhat like a man's, a body Covered with scales, and so Long A tail that it winds all around the Body, passing above the head and going back between the legs, ending in a Fish's tail. Green, red, and black are the three Colors composing the Picture. Moreover, these 2 monsters are so well painted that we cannot believe that any savage is their author; for good painters in France would find it difficult to reach that place Conveniently to paint them. Here is approximately The shape of these monsters, As we have faithfully Copied It."

According to the story published by Russell, the creature depicted by the painting was a huge flying monster that lived in the cliffs. Russell claimed that this creature attacked and devoured people in nearby Indian villages. The legend, as related by Russell, claims that a local Indian chief, named Chief Ouatoga, managed to finally slay the monster using a plan that was given to him in a dream from the Great Spirit. The chief ordered his bravest warriors to hide near the entrance of the Piasa Bird's cave. Outoga then used himself as bait to lure the creature out into the open. As the monster flew down towards the Indian chief, his warriors felled it with a volley of poisoned arrows, causing the creature to fall from the sky and drown. Russell claimed that the mural was painted by the Indians as a commemoration of this heroic event.

Some sources report that this account was likely simply a story created by John Russell, with no actual basis in Native American folklore. The bird imagery is not reported in Father Marquette's original description, which makes no mention of wings, and the cave of bones mentioned by Russel in his account is apparently fabricated. Russel himself later in life confessed that he had created the story behind the Piasa Bird. Nevertheless, Russell's account is commonly related as the history behind the pictograph.

The "Piasa" may also be a representation of the "Uktena", or underwater panther, which appears in the mythology of many eastern native traditions.