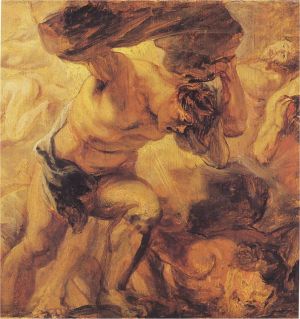 In Greek mythology, the Titans (Greek Τιτάν, plural Τιτάνες) were a race of powerful deities that ruled during the legendary Golden Age. At the beginning, there were 12 Titans (Apollodorus adds a thirteenth Titan, Dione, a double of Theia). They were associated with various primal concepts, some of which are simply extrapolated from their names: ocean and fruitful earth, sun and moon, memory and natural law. The twelve first-generation Titans were led by the youngest, Cronus ("Time"), who overthrew their father, Uranus ("Heaven"), at the urgings of their mother, Gaia ("Earth").

The Titans later gave birth to other Titans, notably the sons of Iapetus — Prometheus, Epimetheus, Atlas, and Menoetius.

The Titans preceded the Twelve Olympians, but were eventually overthrown by them, led by Zeus, in the Titanomachy ("War of the Titans"), and were imprisoned in Tartarus, the depths of the underworld.

In Hesiod's Theogony the twelve Titans follow the Hundred-handers and Cyclopes as the youngest set of children of Uranus, heaven, and Gaia, the Earth:

"Afterwards she lay with Heaven and bore deep-swirling Oceanus, Coeus and Crius and Hyperion and Iapetus, Theia and Rhea, Themis and Mnemosyne and gold-crowned Phoebe and lovely Tethys. After them was born Cronus the wily, youngest and most terrible of her children, and he hated his lusty sire."

Uranus considered Cronos monstrous, and imprisoned him in the bowels of the Earth. Cronus, was aided by the Hecatonchires and Cyclopes, who then set upon his father, castrated him, and set himself as king of the gods, with Rhea as his wife and queen.

Rhea gave birth to a new generation of gods to Cronos, but, in fear that they too would eventually overthrow him, he swallowed them all one by one. Only Zeus was saved: Rhea gave Cronus a stone in swaddling clothes in his place, and placed the infant Zeus in Crete to be guarded by the Kouretes.

Once Zeus reached adulthood, he subdued Cronus by wile rather than force, using a potion concocted with the help of Gaia, his grandmother, to forcibly cause Cronus to vomit up Zeus's siblings. A war between younger and older gods commences, in which Zeus is aided by the Hecatonchires, Gigantes, and Cyclopes, who have once again been freed from Tartarus. Zeus wins after a long struggle, and casts many of the Titans down into Tartarus.

And yet the older gods leave their mark on the world: Oceanus continues to encircle the world, and the name of "bright shining" Phoebe was attached as an epithet to effulgent Apollo, "Phoebus Apollo". Some of them had not fought the Olympians and became key players in the new administration: Mnemosyne as a Muse, Rhea, Hyperion, Themis, or the "right ordering" of things and Metis.

Greeks of the Classical age knew of several poems about the war between the gods and many of the Titans, the Titanomachy ("War of the Titans"). The dominant one, and the only one that has survived, was in the Theogony attributed to Hesiod. A lost epic Titanomachy attributed to the blind Thracian bard Thamyris, himself a legendary figure, was mentioned in passing in an essay On Music that was once attributed to Plutarch. And the Titans played a prominent role in the poems attributed to Orpheus. Although only scraps of the Orphic narratives survive, they show interesting differences with the Hesiodic tradition.

These Greek myths of the Titanomachy fall into a class of similar myths of a War in Heaven throughout Europe and the Near East, where one generation or group of gods by and large opposes the dominant one. Sometimes the Elder Gods are supplanted. Sometimes the rebels lose, and are either cast out of power entirely or incorporated into the pantheon. Other examples might include the wars of the Æsir with the Vanir and Jotuns in Scandinavian mythology, the Babylonian epic Enuma Elish, the Hittite "Kingship in Heaven" narrative, and the obscure generational conflict in Ugaritic fragments.

Hesiod is not, however, the last word on the Titans. Surviving fragments of Orphic poetry in particular preserve some variations on the myth.

In one Orphic text, Zeus does not simply set upon his father violently. Instead, Rhea spreads out a banquet for Kronos, so that he becomes drunk upon fermented honey. Rather than being consigned to Tartarus, Cronus is dragged – still drunk – to the cave of Night, where he continues to dream and prophesy throughout eternity.

Another myth concerning the Titans that is not in Hesiod revolves around Dionysus. At some point in his reign, Zeus decides to give up the throne in favor of the infant Dionysus, who like the infant Zeus is guarded by the Kouretes. The Titans decide to slay the child and claim the throne for themselves; they paint their faces white with gypsum, distract Dionysus with toys, then dismember him and boil and roast his limbs. Zeus, enraged, slays the Titans with his thunderbolt; Athena preserves the heart in a gypsum doll, out of which a new Dionysus is made. This story is told by the poets Callimachus and Nonnus, who call this Dionysus "Zagreus", and also in a number of Orphic texts, which do not.

One iteration of this story, reported by the Neoplatonist philosopher Olympiodorus, writing in the Christian era, says that humanity sprung up out of the fatty smoke of the burning Titan corpses. Other earlier writers imply that humanity was born out of the blood shed by the Titans in their war against Zeus.

Pindar, Plato and Oppian refer offhandedly to man's "Titanic nature". Whether this refers to a sort of "original sin" rooted in the murder of Dionysus is hotly debated by scholars.

In the 20th century

Some scholars of the past century or so, most eloquently Jane Ellen Harrison, have argued that an initiatory or shamanic ritual underlies the myth of Dionysus's dismemberment and cannibalism by the Titans.

She also points out that the word "Titan", comes from the Greek τιτανος, meaning white earth, clay or gypsum, and that the Titans were "white clay men", or men covered by white clay or gypsum dust in their rituals: "The Titans then, the white-clay-men, are real men dressed up as bogies to perform initiation rites. It is only later when their meaning is forgotten that they are explained as Titanes, mythological giants."

The scholar M.L. West also points this out in relation to shamanistic initiatory rites of early Greek religious practices.

Out of confusion with the Gigantes, various large things have been named after the Titans, for example the RMS Titanic.