In the Sirens or Seirenes were Naiad (sea nymphs) approaching sailors were drawn to them by their enchanting singing, causing them to sail on the cliffs and drown. 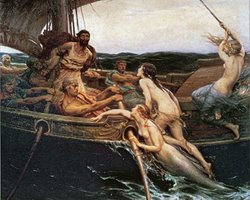 Odysseus and the Sirens. A painting by Herbert James Draper

Sirens were said to live on an island called Sirenum scopuli, or in some different traditions, some place them on cape Pelorum, others in the island of Anthemusa, and others again in the Sirenusian islands near Paestum, or in Capreae, which was surrounded by cliffs and rocks.

They were considered the daughters of Achelous (by Terpsichore, Melpomene or Sterope) or Phorcys (Virgil. V. 846; Ovid XIV, 88). Homer says nothing of their number, but later writers mention both their names and number ; some state that they were two, Aglaopheme and Thelxiepeia (Eustath. ad Horn. p. 1709) ; and others, that there were three, Peisinoe, Aglaope, and Thelxiepeia (Tzetz. ad LycopL7l2)> or Parthenope, Ligeia, and Leucosia (Eustath. /. c.; Strab. v. pp. 246, 252 ; Serv. ad Virg. Georg. iv. 562). Their number is variously reported as between two and five, and their individual names as Thelxiepia/Thelxiope/Thelxinoe, Molpe, Aglaophonos/Aglaope, Pisinoe/Peisinoë, Parthenope, Ligeia, Leucosia, Raidne, and Teles. According to some versions, they were playmates of young Persephone and were changed into the monsters of lore by Demeter for failing to intervene when Persephone was abducted (Ovid V, 551). The term "siren song" refers to an appeal that is hard to resist but that, if heeded, will lead to a bad result.

In early Greek art the Sirens were represented as birds with the heads, and sometimes chests, of women. Later, they were represented as female figures with the legs of birds, with or without wings playing a variety of musical instruments. The 10th century encyclopedia Suda [1] says that from their chests up Sirens had the form of sparrows, below they were women, or, alternatively, that they were little birds with women's faces. Birds were chosen because of their characteristic beautiful voice. However, later in history Sirens were sometimes also depicted as beautiful women (whose bodies, not only their voices, are seductive), or even as mermaids (half woman, half fish).

In some languages (such as Spanish, French, Italian, Polish and Portuguese) the word for mermaid is Siren, Sirena, Syrena or Sereia; this adds confusion to the differences between sirens and mermaids. In English (Anonymous 1989) "Siren" can be used as synonym for "mermaid".

Behaviour: encounters with the Sirens

Odysseus escaped the Sirens by having all his sailors plug their ears with beeswax and tie him to the mast. He was curious as to what the Sirens sounded like. When he heard their beautiful song, he ordered the sailors to untie him but they ignored him. When they had passed out of earshot, Odysseus stopped thrashing about and calmed down, and was released (Odyssey XII, 39).

Jason had been warned by Chiron that Orpheus would be necessary in his journey. When Orpheus heard their voices, he drew his lyre and played his music more beautifully than they, drowning out their voices. One of the crew, however, the sharp-eared hero Butes, heard the song and leapt into the sea, but he was caught up and carried safely away by the goddess Aphrodite. It is said that after a ship successfully sailed by the Sirens, they threw themselves into the water to show protest. Varying traditions associate this event with their encounters with Jason or Odysseus, though the incident appears in neither Homer's Odyssey nor Apollonios Rhodios's Argonautika. It is also said that Hera, queen of the gods, persuaded the Sirens to enter a singing contest with the Muses. The Muses won the competition and then plucked out all of the Sirens' feathers and made crowns out of them.

Part of this article consists of modified text from Wikipedia, and the article is therefore licensed under GFDL.
Retrieved from "https://www.monstropedia.org/index.php?title=Siren&oldid=14800"
Categories: