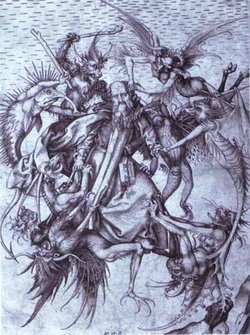 The Temptation of St. Anthony by Martin Schöngauer

There have been many attempts throughout the history of Christianity to classify demons into categories. These systems of classification of demons are a part of Christian demonology. Classification systems are based on the nature of the demon, the sin with which they tempt humans, the month in which their power was strongest, the saints that were their adversaries, or other characteristics.

It can be noted that according to each author listed below, the domain of each demon is very different (with the exception of Francesco Maria Guazzo, who seem to have copied Michael Psellus with little difference.) It can also be seen that each author chooses his demons in a random form.

The Testament of Solomon

The Testament of Solomon is an Old Testament pseudepigraphical work, purportedly written by King Solomon, in which Solomon mostly describes particular demons whom he enslaved to help build the temple, the questions he put to them about their deeds and how they could be thwarted, and their answers, which provide a kind of self-help manual against demonic activity.The date is very dubious, perhaps 1st century to 3rd century, but still certainly the oldest work surviving particular concerned with individual demons.

This is a classification of demons prepared by Michael Psellus in the 11th century and that undoubtedly was an inspiration for the one Francesco Maria Guazzo prepared later.

Alfonso de Spina, in 1467, prepared a classification of demons based on several criteria:

This classification is somewhat capricious and it is difficult to find a criterion for it. It seems that Spina was inspired by several legends and stories. The drudes belong to German folklore. Familiars, goblins, and other mischievous demons belong to the folklore of most European countries.

The belief in incubi and succubae (and their ability to procreate) seem to have inspired the sixth category, but it could also have been inspired in the Talmudic legend of demons having sexual intercourse with mortal women (see also Mastema).

The visions of tempting demons that some early (and not too early) saints had, perhaps inspired the ninth category (i.e. the visions of Anthony the Great).

The idea of old women attending Sabbaths was common during the European Middle Age and Renaissanc, and Spina mentioned it before the Malleus Maleficarum as it is possible to see.

Binsfeld's classification of demons was prepared in 1589 by Peter Binsfeld. His demon classification based on the seven deadly sins, establishing that each one of the mentioned demons tempted people by means of one of those sins.

Francesco Maria Guazzo prepared this classification of demons based on a previous work by Michael Psellus. It was published in his book Compendium Maleficarum in 1608.

In 1613 Sebastian Michaelis wrote a book, Admirable History, in which included a classification of demons as it was told to him by the demon Berith when he was exorcising a nun (according to the author). This classification is based in hierarchies, the sins by means of which the temptation is made, and includes the demons' adversaries (these adversaries are who allegedly suffered that temptation without falling).

Note that many demons' names are exclusively French or unknown in other catalogues. St. John and St. John the Evangelist are the same but were written as if they were different persons (or did he consider St. John as John the Baptist?), and other saints are cited only by their name without making clear, i.e., which Francis is (of Assisi?).

Francis Barrett, in his book The magus (1801), offered this classification of demons, making them princes of some evil] attitude, person or thing:

During the 16th century it was believed that each demon had more strength to accomplish his mission during a special month of the year. In this way, he and his assistants' powers would work better during that month.

The classification of demons by month seems to have astrological implications more than religious ones.

There were also classifications by office, like those written in several grimoires.

Like many works of mystical nature, Le Dragon Rouge (or the Red Dragon) claims to come from Solomon and his priests and is said to be published in 1517 by Alibeck the Egyptian. However, it was most likely written in France in the 18th century.

The grimoire details the different hosts of hell and their powers, describing how to enter a pact with them to attain the magicians' goals. The demons of hell are classified by three different tiers from Generals to Officers.

Pseudomonarchia Daemonum, by Johann Weyer, is a grimoire that contains a list of demons and the appropriate hours and rituals to conjure them in the name of God, Jesus and the Holy Ghost (simpler than those cited by The Lesser Key of Solomon below).

This book was written around 1583, and lists sixty-eight demons. The demons Vassago, Seir, Dantalion and Andromalius are not listed in this book. Pseudomonarchia Daemonum does not attribute seals to the demons. Weyer said to have been inspired by another grimoire also attributed to King Solomon.

The Lesser Key of Solomon

The Lesser Key of Solomon or Lemegeton Clavicula Salomonis is an anonymous 17th century grimoire, and one of the most popular books of demonology. The Lesser Key of Solomon contains detailed descriptions of spirits and the conjurations needed to invoke and oblige them to do the will of the conjurer (referred to as the "exorcist"). It details the protective signs and rituals to be performed, the actions necessary to prevent the spirits from gaining control, the preparations prior to the invocations, and instructions on how to make the necessary instruments for the execution of these rituals.

The author of The Lesser Key of Solomon copied Pseudomonarchia Daemonum almost literally, but added demons' descriptions, their seals and details.