Yōkai (妖怪, "apparitions", "spirits", or "demons") are a class of obake, creatures in Japanese folklore ranging from the evil oni to the mischievous kitsune or snow woman Yuki-onna.

There are a wide variety of yōkai in Japanese folklore. In general, yōkai is a broad term, and can be used to encompass virtually all monsters and supernatural beings, even including creatures from European folklore on occasion (e.g., the English bugbear is often included in Japanese folklore to the point that some mistakenly believe it originates from said folklore).

Some yōkai possess part animal and part human features (e.g. Kappa and Tengu). Yōkai generally have a sort of spiritual or supernatural power, and so encounters with human beings tend to be dangerous.

Japanese folklorists and historians use yōkai as "supernatural or unaccountable phenomena to their informants". In the Edo period, many artists, such as Toriyama Sekien, created a lot of yōkai inspired by folklore or their own ideas, and present day not a few yōkai created by them (e.g. Kameosa and Amikiri, see below) wrongly considered as a legendary origin.

In Japan, there can be found a good number of animals that are thought to have magic of their own. Most of these are henge (変化), shapeshifters, which often imitate humans, mostly women. Some of the better known animal yokai include the following:

One of the most well-known aspects of Japanese folklore is the Oni, which is a sort of mountain-dwelling ogre, usually depicted with red, blue, brown or black skin, two horns on its head, a wide mouth filled with fangs, and wearing nothing but a tigerskin loincloth. It often carries an iron club or a giant sword. Oni are mostly depicted as evil, but can occasionally be the embodiment of an ambivalent natural force. They are, like many obake, associated with the direction northeast. 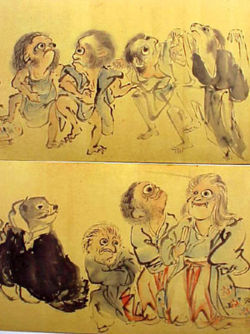 There are a large number of yōkai which were originally ordinary human beings, transformed into something horrific and grotesque usually by some sort of extreme emotional state. Women suffering from intense jealousy, for example, were thought to transform into the female oni represented by hannya masks. Other examples of human transformations or humanoid yōkai are the rokuro-kubi (humans able to elongate their necks during the night), the ohaguro-bettari (a figure, usually female, that turns to reveal a face with only a blackened mouth), futakuchi-onna (a woman with a voracious extra mouth on the back of her head), and dorotabō (the risen corpse of a farmer, who haunts his abused land), among many others.

There are countless number of yōkai that are too bizarre to fit into broad categories. These are usually some sort of perversion or transformation of creatures found in ordinary life, or are entirely new types of goblin-like creatures. Some examples are the abura-sumashi, an old, smug-faced and potato-headed goblin who drinks oil; the ami-kiri, a creature that exists for no other purpose than to cut mosquito netting; and the ushi-oni, a cow demon that is sometimes depicted with the body of a giant spider.

Various kinds of yōkai are encountered in folklore and folklore-inspired art and literature, particularly manga and Japanese horror. The man to whom most of the credit should go for keeping yōkai in the popular imagination (at least in Japan) is Shigeru Mizuki, the manga creator of such series as GeGeGe no Kitaro and Kappa no Sanpei. With the exception of three volumes of GeGeGe no Kitaro, however, Mizuki's works have yet to be translated into English.

Yōkai have continued to be a common theme in modern works of fiction. They served as the stars in the 1960's Yokai Monsters film series, which was loosely remade in 2005 as Takashi Miike's The Great Yokai War. They often play major roles in Japanese animation and comics, including animated films such as Studio Ghibli's Pom Poko, and various series such as Yōkai Ningen Bem, InuYasha, Hell Teacher Nūbē, Karas, Naruto, Tactics, YuYu Hakusho, Saiyuki, InuYasha, Kekkaishi, Shonen Onmyouji and Harukanaru Toki no Naka De. They also appear commonly in video games, such as Darkstalkers, Ōkami, Touhou and Pocky & Rocky They were also the enemy for 1994's Ninja Sentai Kakuranger.

In the English-speaking world, knowledge of yōkai is slowly, but surely, developing a dedicated following. Hawaiian folklorist Glen Grant was known for his "Obake Files", a series of reports he developed about supernatural incidents in Hawaii; the grand bulk of these incidents and reports were of Japanese origin, though in retelling have been much modified from their original forms in Japanese folklore. Additionally, Mexican-American folklorist and author Alfred Avila included "La Japonesa", a story about a nekomusume, in his collection Mexican Ghost Tales of the Southwest.